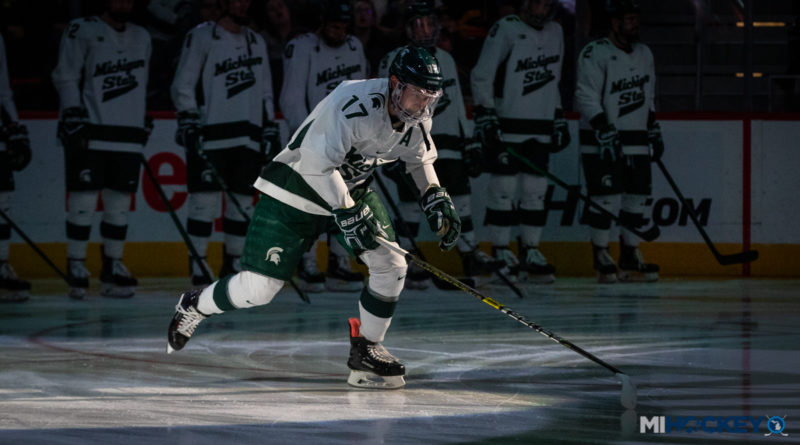 Taro Hirose is leaving East Lansing at around 2 p.m. today.

Why not sooner, considering he had signed with the Detroit Red Wings on Tuesday?

He needed to talk to one of his teachers.

“…This morning I had to talk to a teacher about leaving,” Hirose, a finance major with a 3.68 GPA, told MiHockey Thursday afternoon. “It’s a Thursday class that’s only on Thursday – I wanted to make sure I was there to talk to her face-to-face and let her know what’s going on.”

That statement should give Red Wings fans an idea of the most recent addition to their Original Six franchise – both on and off the ice.

Smart, deliberate, thoughtful – with the puck and with his studies.

“It feels awesome,” he said. “It’s a little crazy that I could be playing in the NHL in the upcoming week. I’m just really excited and honored to be part of such a great organization.”

Hirose is forgoing his senior season to turn pro; he had offers from plenty of other NHL franchises after posting 50 points in 36 games with Michigan State.

He said his decision to drive down I-96 came from a variety of factors.

“I think they understand my game and they showed a long-term plan for me, developing me and making sure that I can turn into the player that I want to be,” Hirose said. “Just looking at who they have, I saw some opportunity there that maybe I didn’t see in some other teams.”

It didn’t hurt that he enjoyed his time with the Wings at the team’s development camp this past summer.

“I think that just added a comfortability to it, knowing the building and the area of Detroit and obviously meeting all of the people in the organization was big. Being comfortable there was a huge factor for me.”

“I think it’s pretty cool that I’ve gotten to know the building, played there a couple times,” Hirose said. “I’m sure it’s completely different when the Wings are playing there, but it’s obviously an unbelievable building, and I’m happy to be a part of it.”

The decision to leave early wasn’t an easy one.

“I think it was tough, I obviously love Michigan State here and everything it has to offer. It was definitely a tough decision, but I think, for me, turning pro was just sort of the right time for me.”

The worst part, according to Hirose, was saying goodbye to the two other members of the famed KHL line – Patrick Khodorenko and Mitch Lewandowski. The trio combined for 121 points this year, after 108 in 2017-18.

“Yeah, probably the toughest part, you know? The guys are definitely the hardest thing to leave. I saw those guys last night and talked to them a bunch and I just wished them the best next year and things like that. It’s obviously tough, but I know they’ll be just fine without me.”

He will have one familiar face in the Wings’ locker room to help with the transition, however, as MSU alum Justin Abdelkader has already reached out to him.

“Yeah he sent me a text and I talked to him a couple weeks ago when I was down there, so I’m just looking forward to seeing him and it’ll be nice to have another MSU guy there.”

Hirose said he will be arriving at Little Caesars Arena this afternoon to meet with the Wings’ brass and see what’s next.

At the same time, the finance major will be making sure he wraps up his degree – be it in-person or online.

“I’m trying to finish the classes this semester, working with all my teachers. Through summer classes and online stuff, I’m definitely planning on finishing up.”