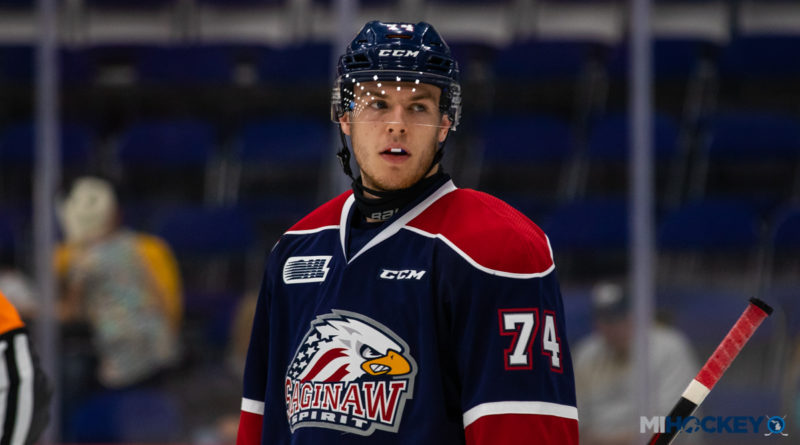 The Saginaw Spirit begin their hunt for the J. Ross Robertson Cup tonight on home ice against the Sarnia Sting.

And after the team’s best regular season in franchise history, the Spirit will aim to make it past the second round of the OHL Playoffs for the first time ever. This year marks the team’s 13th postseason appearance in 14 seasons.

The 2018-19 campaign saw Saginaw post a 45-17-3-3 record (96 points), in which the squad lost just eight times in regulation since late November when Chris Lazary was promoted to head coach.

Perfetti, the team’s fifth-overall selection in the 2018 OHL Priority Selection, led all rookies in goals (37) and points (74).

After two seasons with hometown USA Hockey’s National Team Development Program, Wilde produced at a 1.13 points-per-game clip from the blue line with 19 goals and 70 points in 62 games. Those 70 points were good for third on the team and his 51 assists led Saginaw.

Only two other defensemen in Spirit history have produced at least 60 points in a single season, one being Detroit Red Wings blue liner Filip Hronek (61 points; 2016-17) and the other is Patrick McNeill (77 points; 2005-06).

Jackson native Blade Jenkins, in his second season with the Spirit, posted career-high marks across the board, with 23 goals, 36 assists and 59 points in 67 games.

Both Jenkins and Wilde were picks of the New York Islanders in the 2018 NHL Entry Draft.

Saginaw heads into the playoffs with the league’s 10th-ranked power play, converting at a 22.5-percent success rate, while sitting third on the penalty kill (77.9-percent).

The six-game regular-season series between Saginaw and Sarnia saw an even split of three wins aside.