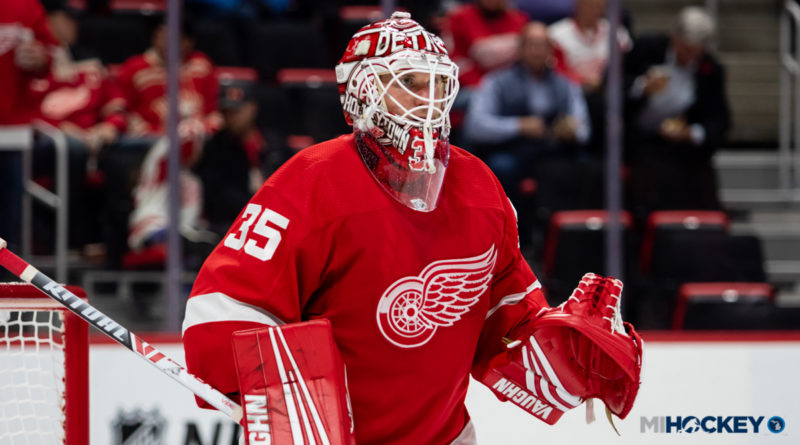 The Detroit Red Wings officially have their goaltending set for the 2019-20 campaign.

Detroit has signed veteran netminder Jimmy Howard, 34, to a one-year extension worth $5.1 million ($4 million base plus $1.1 million in playoff bonuses).

“It means a lot,” Howard said during his postgame interviews with reporters last night, as the news slowly leaked out (quotes captured from the Wings’ TV postgame video). “This is the only organization I know, and I love playing for the Wings, my family loves living in Detroit. It’s very special.

“It totally makes sense to me. I’ll turn 35 here in a week, and from there on out, I’m fine with one-year contracts.”

Howard was making $5.29 million, so the move will give the Wings a little, but much-needed cap space. As Bob McKenzie of TSN reports, it’s a $5.1 million deal that only counts as $4 million if the Wings miss the playoffs next year. The deal also included a no-trade clause, allowing the Red Wings to freely move Howard if desired.

$5.1M AAV. But $1.1M of that is entirely based on playoff bonuses. If the Wings don’t make the playoffs next season, no bonus and Howard would get only his $4M salary. https://t.co/ZBiIOdm1RS

Jonathan Bernier, 30, is signed through the 2020-21 season as the Wings’ other goaltender.

Howard, who recently played in his 500th NHL game, was Detroit’s representative at the 2019 NHL All-Star Game. His 240 career wins are third-most as a Red Wings netminder, while his 24 shutouts rank fourth.

The USA Hockey’s National Team Development Program alum holds a 240-171-68 lifetime record with Detroit, along with a 2.54 goals-against average and .914 save percentage.