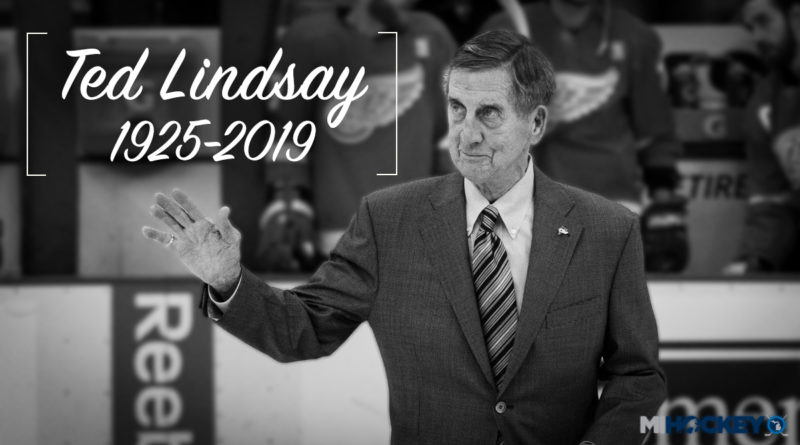 Detroit Red Wings legend and NHL Hall of Famer “Terrible” Ted Lindsay has passed away at the age of 93.

Statement from the Lindsay family, as shared by the Red Wings:

“Red Wings legend Ted Lindsay passed away peacefully this morning at his home in Oakland, Mich. He was 93 years old. Ted was a persistent, courageous and determined man both on and off the ice. He was a man of many firsts. We are comforted in knowing that the Ted Lindsay legacy will forever be a part of history and are so proud of the many lives he helped change for the better through his tireless humanitarian work. Arrangements will be announced when they are finalized.”

The Red Wings went on to retire Lindsay’s iconic No. 7 in 1991 and is one of six numbers hanging from the rafters of Little Caesars Arena.

“The National Hockey League mourns the passing and celebrates the incomparable life of the legendary Ted Lindsay. One of the game’s fiercest competitors during his 17-season NHL career, he was among its most beloved ambassadors throughout the more than five decades of service to hockey that followed his retirement. In Detroit, he was a civic icon.

What Lindsay lacked in physical stature, he possessed in intensity, desire and will to win. He played 1,068 NHL games for the Detroit Red Wings and Chicago Blackhawks, scoring 379 goals with 472 assists and 1,808 penalty minutes. He appeared in 11 All-Star Games and was named a First-Team All-Star eight times. He won the Art Ross Trophy as the League’s scoring leader in 1950 and, as a driving force on the dynastic Red Wings teams of the 1950s – including as the left wing on the famed Production Line – he won the Stanley Cup four times.

Named to the Hockey Hall of Fame in 1966, he had his No. 7 retired by the Red Wings in 1991 and was named one of the NHL’s Top 100 Players during the League’s Centennial Celebration in 2017. As influential off the ice as he was on the ice, Lindsay was instrumental in the formation of the NHL Players’ Association. In 2010, NHL players displayed their reverence for him by renaming their annual award for the most outstanding player the Ted Lindsay Award.

There was no one quite like Ted Lindsay. We send our condolences to Ted’s children Blake, Lynn and Meredith, his stepdaughter Leslie, his six grandchildren and his three great grandchildren and join them in marveling at his incredible life.”

Lindsay was also instrumental in the organization and formation of the National Hockey League Players’ Association, which was founded in 1967, just one year after Lindsay’s Hockey Hall of Fame induction.

Lindsay was also well known for his work off the ice. In 2001, he and friend John Czarnecki founded the Ted Lindsay Foundation to raise money to fund research on the cause and treatment of autism. Since its inception, the foundation has raised over $4 million through events like their celebrity golf outing and wine tasting.

Most recently, Lindsay was named to the “100 Greatest NHL Players” list as part of the league’s centennial celebration.

Some of the stories from Lindsay’s recent charitable work:

The players and NHLPA staff are deeply saddened to learn of the passing of Ted Lindsay – a player, a trailblazer, and a gentleman. “Terrible Ted” was loved across the hockey world and beyond for his play, dedication to fellow players and charitable work. https://t.co/jpDcnWZ68l pic.twitter.com/0QBECLqmva

A gentleman, a multiple Stanley Cup winner, an honoured member of the HHOF, a fan of the game, and a dedicated member of the #NHLAlumni– Ted Lindsay has passed away at the age of 93. A great loss for the entire hockey community. Our thoughts are with the Lindsay family. pic.twitter.com/WWDmZeDqR3

Ted Lindsay has passed at 93. Outstanding player, NHLPA founder but my fav memory was how he boycotted his own HHoF in ’66 induction because wives and families were not allowed to attend. The rule changed after that. RIP.

The face and spirit of hockey has left us. RIP Ted Lindsay. pic.twitter.com/AhkBdKtJkF

The hockey world loses one of it’s finest! @HockeyHallFame member and 4 x time #stanleycup champion, @DetroitRedWings Ted Lindsay…will be remembered for everything he did for the great game of hockey. Not very many in the game have a trophy named in your name.@NHLPA @NHL pic.twitter.com/LKCqc9Ia3f

Grief.
Mr.Ted Lindsay was an icon both on and off the Ice.The numbers and hockey stories are being articulated but his tremendous contribution to our foundation will be his legacy with us and the community we serve.
His spirit will always be with us
Rest easy and Godspeed Friend pic.twitter.com/bH9cbZA88l