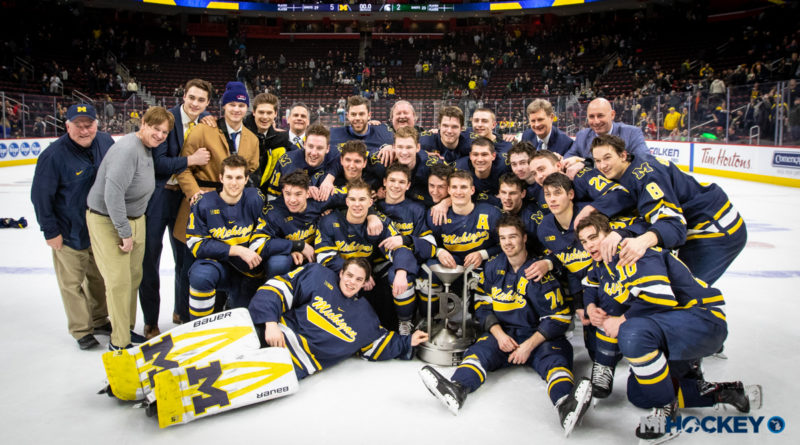 DETROIT – It’s a trend that had haunted Michigan since entering 2019.

In all three of their two-game series thus far in the new year, the Wolverines had won the first game and then lost the second.

With already having a 5-3 win over rival Michigan State on Friday in Ann Arbor, the Wolverines found themselves in the same position once again. This time, they quelled their Saturday demons with a 5-2 win over the Spartans at Little Caesars Arena in Detroit to sweep the series.

Freshman Strauss Mann picked up the win in goal for Michigan, while Nolan Moyle and Quinn Hughes each picked up three points.

Prior to the win, you would have to go back to Nov. 3, 2018 to find the last Saturday game the Wolverines won as part of a two-game series. Mann’s performance in goal helped reverse that trend.

“We had to do something to change this Saturday funk, and it’s not all on Hayden Lavigne, but we need a change, and sometimes coaches don’t want to change,” MSU head coach Mel Pearson said. “We get in this rut, change is hard sometimes, but I thought it was the right move and [goaltending coach]  Steve Shields has done a good job with Strauss. And good for Strauss. For a freshman to come in a big game like that against a rival in a big building, he did a heck of a job.”

For the Spartans, Mitchell Lewandowski scored both goals in the loss, while Jerad Rosburg picked up two helpers.

“There’s a lot of emotion in a game like this, but overall I thought the guys competed and battled hard tonight,” MSU head coach Danton Cole said. “There’s some things we can do better. I don’t know if it was our best weekend, but give Michigan credit. They skated well, took away time and space. You tip your hat, you move on, you get ready for Penn State next week.”

Michigan jumped out to a 2-0 lead within the game’s first ten minutes, as Dakota Raabe potted his fifth of the season off a Quinn Hughes feed in the slot. Will Lockwood then followed up the Raabe goal with his 13th of the year, the eventual game winner, banging home a rebound in front of MSU goaltender Drew DeRidder. Hughes drew the secondary helper on the goal.

With just 1:51 to play in the second period, Michigan’s Garrett Van Wyhe drove hard to the net for a scoring chance, but ran over DeRidder in the process. With the Michigan State netminder down, the Wolverines thought they scored on the rebound, but the goal was called back and Van Wyhe was assessed a penalty on the play.

The kept the Spartans within two heading into the final frame.

But a forehand-backhand breakaway goal from Moyle early in the third period added some much-needed insurance for Michigan.

Especially since Lewandowski broke Mann’s shutout with a rebound goal on the power play with 6:57 left on the clock. With just over four minutes to play, Lewandowski drove hard to the net and one-timed home a Rosburg pass to make it a one-goal game.