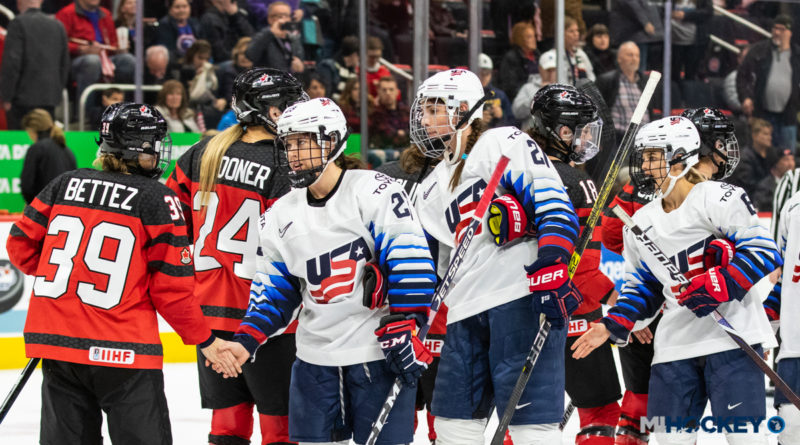 DETROIT – Of course the United States and Canada split the first two games of the 2019 Rivalry Series.

Of course. It would only be fitting for such bitter rivals to head into Sunday at Little Caesars Arena with the decisive third game left to settle things.

But it was Team Canada that took the final game in Detroit, a 2-0 final. Brianne Jenner and Blayre Turnbull scored for Canada, while Shannon Szabados stopped all 38 shots she faced to earn the shutout, especially impressive considering Team USA outshot Team Canada 38-17.

Despite the outcome, Team USA still enjoyed the experience.

“Any time we can play these guys is fun; we strive for these games, it’s what we train for,” Decker said. “And obviously it wasn’t the turnout we wanted today on home soil, but a heck of a game. I think it was fun to play against those guys and hopefully we can continue to play them.”

“We go up to practice yesterday and see all the Stanley Cup banners,” said forward Hilary Knight. “It’s really cool to be in a building with so much history in terms of the Red Wings hockey club and what they’ve done for the sport and continue to use their resources to get more girls in the game.”

In the game, Jenner opened the scoring for Canada with a slap shot from the right circle, an early power-play goal.

Turnbull made it 2-0 early in the second period, as she drove toward the U.S. net and redirected home a beautiful Laura Stacey pass.

Through two periods, Szabados stopped all 28 shots the U.S. threw her way.

And at 2:23 of the final frame, she was nearly beaten by the U.S., as appeared that Savannah Harmon may have put the U.S. on the board. Harmon sent a wrist shot over a sprawling Szabados and into the net. However, the goal was disallowed due to goaltender interference just moments prior as Szabados was run over.

That was as close as the U.S. would get, as Szabados and Team Canada’s two-goal lead stood up until the final buzzer.

“We are definitely thankful for the support we had today,” Decker said. “We’re just trying to get the word out there. The more we can grow the game and the more we can get fans to watch us, I think that’s the most important thing. So obviously the outcome was a little tough today, but hopefully they can continue to come back and support us.”