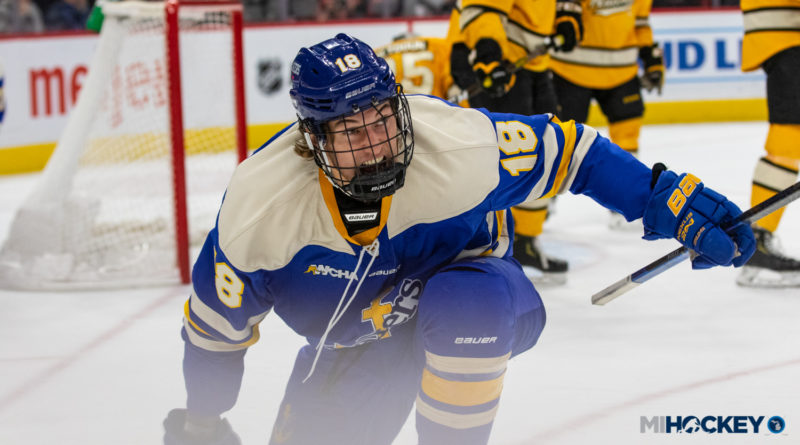 DETROIT – Lake Superior State hadn’t made an appearance at the Great Lakes Invitational since before Y2K before heading to Detroit for the 54th edition of the holiday tournament.

They made up for lost time.

Bryan Basilico’s third-period goal turned out to be the game-winner for Lake State in the victory before the Lakers added two empty-net goals to start the celebration early.

Nick Kossoff recorded his second win in as many days between the pipes for LSSU.

It’s the third straight GLI that the special invitee has won the two-day tournament, as well, after Bowling Green won earlier in 2018 (Jan. 1-2) and Western Michigan won before that.

Lake Superior State competed in the tournament for the first time since 1999, only the fourth time overall and had never won the tournament entering this year’s edition.

Cuglietta put the Lakers on the board first at 10:34 of the opening frame, as he banged home the rebound from a Max Humitz (Livonia) shot. For Cuglietta, it was his third goal in two games after scoring a pair – including the overtime winner – on Sunday night.

Hampus Erikkson extended the LSSU lead to two just 1:02 later, but the Huskies got a big goal from Jake Lucchini late in the period to cut their deficit to one heading into the second frame.

Early in the second period, the Lakers lost captain Gage Torrel, as he was given a five-minute major and game misconduct for a hit to the head. And less than a minute into the lengthy power play, Alex Smith struck for Michigan Tech to even things up at two.

But just past the game’s halfway mark, Humitz scored his second of the tournament, with the assist going to Anthony Nellis, to give LSSU the lead once again.

The Lakers outscored Michigan Tech 3-1 the rest of the way out,  including two empty-net markers, to secure a 6-3 final.