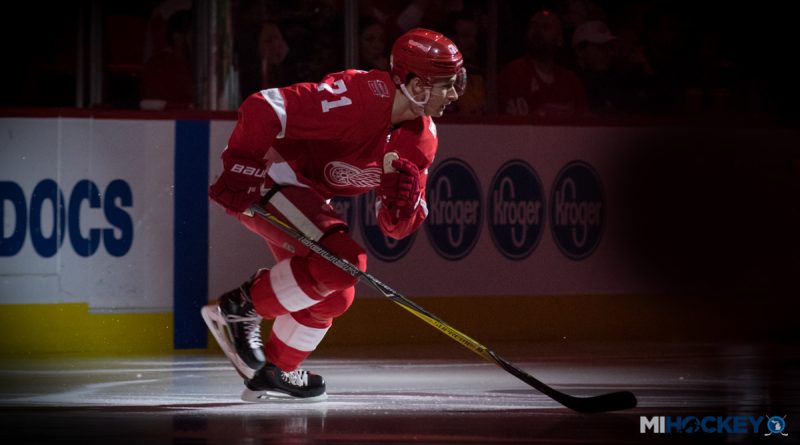 He has quickly become the face of hockey in the state of Michigan.

The Detroit Red Wings have signed Dylan Larkin to a five-year contract extension.

“First, it’s a huge honor,” Larkin said Friday, less than an hour after the new contract was announced. “To stay in my hometown, to have this commitment to sign here and be a red wing for five more years, it’s just a great honor. Something I’m proud of, and I feel really good about this contract and getting it done. It’s something that my family and myself, we feel really proud that they have this commitment in me and it feels great.”

It’s the latest landmark achievement for the Waterford native, who has spent his entire hockey career – youth on up – playing for teams within driving distance of his childhood home.

From the Lakeland Hawks to Belle Tire to USA Hockey’s National Team Development Program to the University of Michigan, Larkin has been cultivating a hockey journey a youngster in Michigan could only dream of – and now, he’s making a superstar-worthy $6.1 million per season from the iconic Original Six franchise that was always just down the street.

The longest drive for Kevin and Sidney Denise Larkin to see their son play in a home game was a trip to Grand Rapids for Dylan’s short stay with the Griffins in the spring of 2015; certainly manageable when you consider that he could have played in a different state, at the very least, during some point in his rise through the ranks.

“It’s pretty cool,” Larkin said when MiHockey asked him to reflect on the fact that his entire career has played out so close to home. “It’s amazing. I feel pretty emotional right now about it. I don’t know if it’s setting in or anything, but I’ve gotten a lot of texts today and a lot of congratulations. I’m very proud to be from Waterford and be a local boy playing for the Red Wings. Five more years, it’s a great feeling, and that sense of security being home and near my parents – now they’re starting to get sick of going to games. They said they’d never be like that, but, yeah, it’s special and it’s pretty cool.”

He was the last of the big three restricted free agents to sign with the Wings; Anthony Mantha and Andreas Athanasiou signed shorter-term deals while Ken Holland and Larkin’s agent worked their way through a more substantial deal for No. 71.

Larkin’s presence in Hockeytown extends beyond his on-ice performances with the Wings. He runs a hockey school with his brother and cousins at his hometown rink of Lakeland Ice Arena. He skates in the Eastside Elite Hockey League in the summer, signing autographs for fans who purposefully or accidentally run into him at Mount Clemens Ice Arena. He is in the process of organizing a star-studded affair of a charity game in honor of the late Jim Johannson, bringing some of the top names in USA Hockey to the NTDP’s home in Plymouth.

He understands his role as an ambassador for the game, and he delivers on the expectations. All that, along with everything else he brings to the table, made this contract an easy decision for Ken Holland.

“He just turned 22 here sometime in the month of July, so he’s obviously a young player,” the Wings’ general manager said. “He led our team in scoring with 63 points. As all Red Wings fans have watched him for the three years of his entry-level contract, I think he’s made tremendous progress in learning to play a 200-foot game. His first year pro, he played on the left wing with Zetterberg and had a real nice rookie year with 23 goals. Then the last two years we’ve transitioned him from left wing to center ice where there’s more responsibility and he led our team in scoring last year. He became way better defensively and played way more important minutes last year and at the age of 22, obviously his best years are ahead of him.

“The last thing, when you go into a negotiation, you know your player. Dylan brings a lot of determination and a lot of passion and he loves the game of hockey. Since we’ve been eliminated, our season ended in April, he jumped at the opportunity represent his country at the World Championship for a month, he’s got the Dylan Larkin Hockey School, I know he went to the Dan Cleary Hockey School last week, this week he’s in Toronto at a camp with a lot of other NHL players working on skill development, and then obviously he’ll go back to Detroit and start skating with the players as they start to filter into the town.

“He’s a young player who loves the game of hockey, he loves to be in a rink and he’s 22 and he led our team in scoring. It took some time here, we’ve probably been at it for a couple of months. We started in May with Kurt Overhardt and Joe Oliver, his agent and I, and met a little bit in June at the draft and obviously from the draft to early July, everybody goes in a different direction with free-agency and development camps. We picked it up here in early July and we’ve been talking two, three, four times a week over the last month, trying to find what both sides felt was a good solution for a really good young player in our organization. I think the contract we signed today is a really good contract for Dylan and a really good contract for the Red Wings.”

Our Larkin highlights from over the years:

Headlines from Dylan Larkin’s first season with the Red Wings

Dylan Larkin: “I couldn’t have it any better”

Dylan Larkin has officially signed with the Red Wings, joining Griffins after one year with Michigan

VIDEO: The Larkin boys talk about the Larkin Hockey School