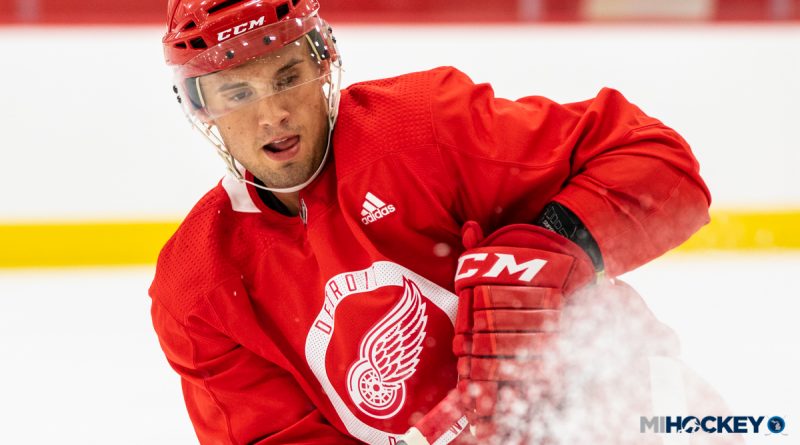 DETROIT – When Trevor Hamilton was asked if he had assumed a leadership role with some of the other players at the Red Wings development camp, he referred to them as ‘the little guys.’

Funny, of course, because the Grosse Pointe Farms native won’t win any height-chart competitions this week.

Fitting, though, because he’s one of the elder statesmen of the group. Hamilton has attended two previous Wings development camps in Traverse City.

“Yeah, definitely, trying to help out guys as much as I can,” said Hamilton, who signed with the Grand Rapids Griffins this offseason after the conclusion of his college career at Penn State. “Everyone’s seeing this place for the first time this week, so we’re kind of walking around like where do we go and everything, but me and a couple of the other older guys, we’re just trying to help out where we can, get in the front of the line, and show the little guys – not the little guys but the younger guys – how it’s done.”

Asked if he felt like the old man in the group, he laughed.

“Yeah…yeah, a little bit. I was talking to the guys and they were like yeah, ‘I’m a 99 [birth-year], I’m a 2000 and I thought, ‘oh my gosh, I feel so old here.’” The 1995 birth-year defenseman said. “It’s like when I came into camp as one of the younger guys. It’s definitely…camp’s only getting better and it’s definitely nice to get a little conditioning and get back into a hockey sense in the middle of summer here.”

While he’s guiding others, he’s also preparing for his first professional hockey season. He’s getting a jumpstart on that by spending the week with new Griffins head coach Ben Simon and other members of the DRW/GRG coaching and development staffs.

“It’s been nice, been talking to [Simon] on the ice and everything,” the former USA Hockey’s National Team Development Program and Muskegon Lumberjacks defenseman said. “Just trying to get to know him and introduce myself, just meeting him for the first time, it’s great, and being on the ice and seeing how he runs practices, it’s really up-tempo, which I think is a good fit for me.”

He’s also cherishing his latest experience of skating with his hometown NHL team – with the added bonus of a behind-the-scenes look at Little Caesars Arena.

“It’s awesome,” he said of the camp. “Obviously the new facilities and everything; it’s my first time seeing them. It’s be the best I’ve ever seen. And obviously putting that Red Wings logo on your chest, I take a lot of pride in it. Growing up watching the Red Wings play, it’s really cool to put it over my chest.”

The former Nittany Lions defenseman is thankful for the opportunity he has this upcoming season with the organization after signing with Grand Rapids.

“It was a huge accomplishment for my family and I,” Hamilton said. “I know they’re really proud of me, and to stay close to home with GR and Toledo and being two hours away, it’s definitely nice for them to come see me play and everything. Looking at GR, they just won a Calder Cup two years ago, and Toledo has made the playoffs the last couple of years, so I’m getting put into a good spot. Everything is earned, and this summer I’m just looking to turn some heads going into this camp and the main camp and hopefully make a spot for GR.”

In Grand Rapids, he will be significantly closer in distance to his dad than in years past. Mike Hamilton was named head coach of the Muskegon Lumberjacks, the team Trevor once captained, on May 15.

“I couldn’t be more proud of him,” Trevor said. “It’s something he’s always wanted to do. My family and I are very grateful for what he’s done for us and to see him move up in the world is awesome for us.”