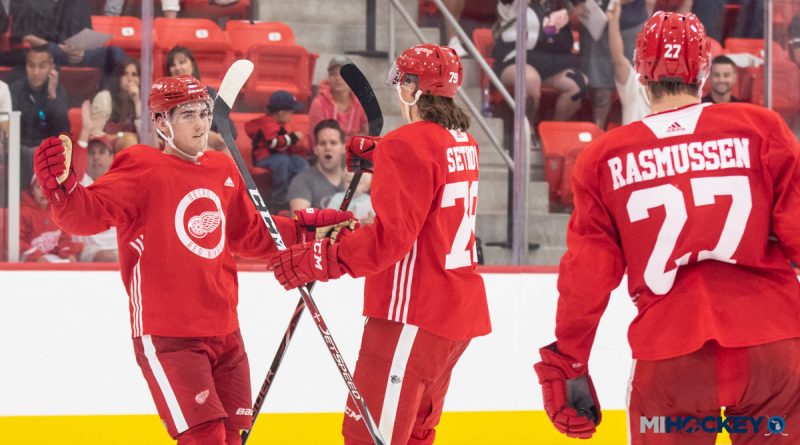 Filip Zadina scored the overtime winner for Team Howe in their come-from-behind win.

“Couldn’t have asked for any better, especially for the fans,” Red Wings director of player development Shawn Horcoff said. “What a great game. I was a little worried there when we were down a bunch, but the guys turned it up, battled hard and came back.”

Kivenmaki opened the scoring in the first period, but Rasmussen tipped home a point shot on the ensuing shift to even things up at one aside. Rasmussen played on a line with Zadina and Givani Smith, and the line drew high praise from Horcoff.

“I thought [Smith] played real well, did exactly what we need him to do at the pro level on that line,” Horcoff said. “It’s fun watching skill. You can tell these guys have a bright future and that as hopefully the start of many more.”

Defenseman Dennis Cholowski opposed that top line from Team Howe most of the game, and he also drew praise from Horcoff.

“Dennis, you can tell he’s an elite skater. He has a great first pass. For him, I told him any time before it’s going to come down toe defense for him. Can he defense against the best players n the game? I thought he did a good job tonight, and I think he’s getting better in that area. Each year he’s improved more, and I’m actually looking forward to seeing him in camp.”

Adams added his first of the game, as he crashed the net and caught a piece of Alec Regula’s point shot.

In the second frame, Hirose, Adams and Pope scored to make it a commanding 5-1 lead before Gilmour and Elfstrom pulled Team Howe back into the game before the frame ended.

Morgan, a University of Michigan forward, cut Team Lindsay’s lead to one in the third period momentarily, but Western Michigan forward Colt Conrad struck back for his squad just seconds later to retake a two-goal advantage.

Pearson buried a one-timer in the slot for Team Howe to pull his team to within one once again, a 6-5 score at that point.

Smith then potted his first of the game, as his second and third efforts to bang home a rebound paid off. That tied the game at six to ultimately send the game to OT, where Zadina potted the winner off a Rasmussen feed.

The Red Wings conducted a shootout at the end of the contest, as well, and Zadina didn’t disappoint, scoring a highlight-reel goal during his penalty shot.