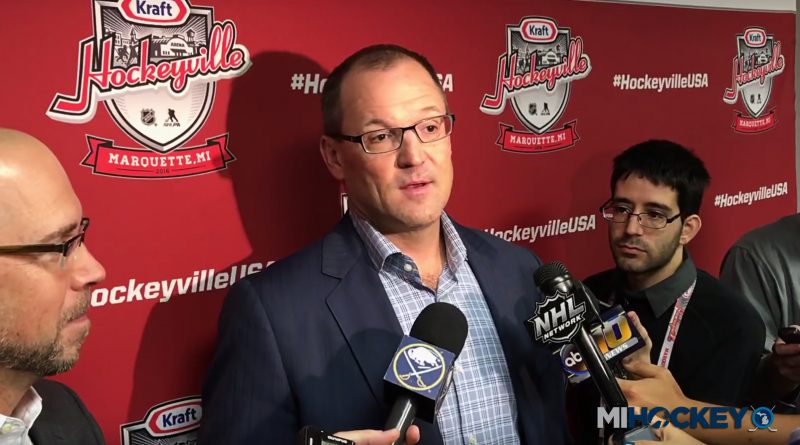 The Detroit Red Wings have filled their vacancy on the bench with a Michigan native who has a Stanley Cup to his name.

Bylsma said he had “always had it in the back of my mind” to return home and coach on the Red Wings’ bench.

“I’ve lived two lives in this aspect: The first 20 years of my life I was a Detroit Red Wings fan, and for the next half of my life, I may not have been, but I’ve always had in the back of my mind that coming back home and working for the Red Wings and being part of the Red Wings organization was something I wanted to do, and certainly, this is an opportunity that Jeff afforded me to be able to come back home so to speak,” Bylsma said. “It’s a ways away from where I’ve always lived in Michigan, but I’ve been around the Red Wings fans for a long, long time, and I’ve already gotten a lot of love and support from people in the area saying welcome home and welcome to the Red Wings, and that was a big aspect of my decision to join Jeff and join the Red Wings.”

The Red Wings mark Bylsma’s third stop as a NHL coach. After retiring from his 429-game NHL career in 2004, Bylsma began his NHL head coaching career in Pittsburgh in 2009, as he took over the Penguins’ bench 57 games into the 2008-09 campaign. There, he turned around the Pens’ season and led them to a Stanley Cup championship over the Red Wings, who aimed for a second-straight title.

Bylsma went on to coach five additional seasons in Pittsburgh—winning the Jack Adams Award as the league’s top coach in 2011—before spending two with Buffalo. In April 2014, Bylsma became the fastest NHL coach to 250 wins, needing just 395 games to reach the milestone.

On the international stage, Bylsma coached Team USA in the 2014 Winter Olympics in Sochi and, most recently, worked with Blashill behind the bench at the 2018 IIHF Men’s World Championships. Blashill credited his video coach Adam Nightingale for insight into Bylsma as a coach, as the two worked together in Buffalo on the Sabres’ staff.

“Adam and I would actually talk lots about the experience in Buffalo and talk lots about Dan as a coach and his strengths and that, so I felt like I had a little more knowledge going into it,” Blashill said.

But above all homework, Blashill added that working with Bylsma firsthand in Denmark was the best kind of interview imaginable.

“But there’s not an interview you could ever have that could be anywhere near the level of importance compared to working with somebody in a setting that we worked in at the World Championship for three and a half weeks. That would supersede any interview, any process you could ever go through to get a real feel for what I am as a coach, for what Dan is as a coach, and I think we both felt real comfortable in our relationship that way.”

Bylsma said finding comfort level with Blashill at the World Championship attracted him to the position. The veteran coach will handle the Red Wings’ power play and offered his insight into what makes a power play successful.

“You look at good power plays in the league and what makes a good power play and you can look at different aspects, different setups from power plays that have been elite,” Bylsma said. “The Capitals, it looked different than the Pittsburgh Penguins’ power play. The Buffalo Sabres’ success two years ago looks different than the Washington Capitals or Philadelphia Flyers, but I think there’s several different aspects you need to have on your power play to be an effective one. Possession, entry in the zone is a key importance. It starts with a faceoff, might be a breakout… a shot and an attacking mindset and mentality is huge indicator of power play success, and teams that have those aspects to their power play have a lot of success. Toronto was an example of that kind of mentality, where they’re attacking and shooting and then converging to the net front. That’s where they gained their power-play success over the last two years. Once we evaluate the players that are going to be on the power play and who’s gonna be put where, you’ll see a certain kind of mentality from us, but it’ll always end up with shots and activity around the net and chaos around the net and attacking and converging, really the core essence of having success on the power play.”