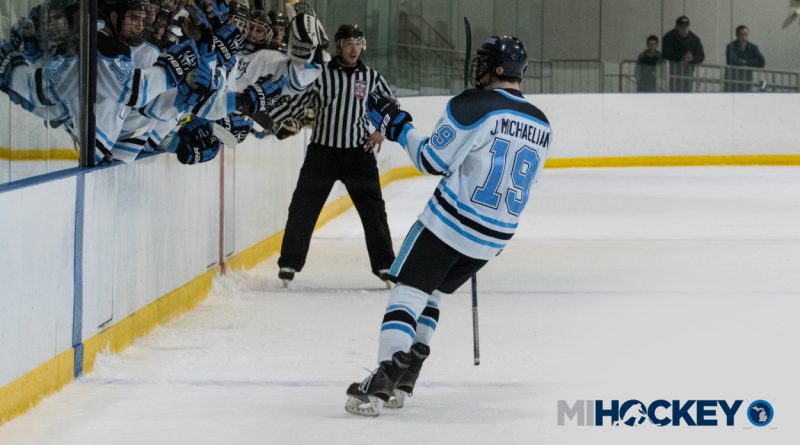 Today, Justin Michaelian announced that he has committed to the Ferris State hockey program.

“I picked Ferris State because of the history of their coaches and their program, and how they develop their players,” Michaelian told MiHockey. “Being a Michigan-born player, it means a lot to be able to play for Ferris State and to represent the school I watched growing up. When I got the chance to go on a visit I couldn’t resist.”

A native of Wixom, Michaelian has spent the last two seasons with the Victoria Grizzlies of the BCHL. He nearly doubled his points total in his sophomore season of juniors, logging 44 points in 48 games (he had 23 in 2016-17).

Michaelian said he is excited to play for Coach Bob Daniels and the FSU staff.

“The way they treat their players is second-to-none and are known in the hockey world for what kind of program they have and how they develop their players,” Michaelian said. “I’m really honored to be part of such a prestige program. I’ve been dreaming of this day for a while now and I am very excited to be playing college hockey. It’s one thing I’ve wanted ever since I started playing the sport.

“Being a student-athlete and being able to play and represent your school is something that I’ve been looking forward to for a while now.”

Michaelian is a product of Victory Honda and the Oakland Jr. Grizzlies; seasons with the VH 16U and 18U teams bracketed a 2014-15 campaign with OJG.

I’m very excited and proud to announce my commitment to play D1 college hockey at Ferris State University. Thank you to all my family, friends, teammates and coaches who have helped me along the way. #Bulldogs pic.twitter.com/rsK5B1mEpd