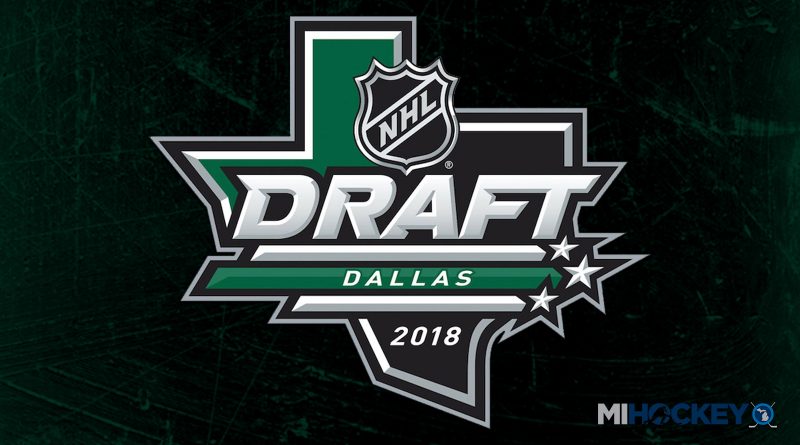 DALLAS – MiHockey has arrived in Dallas, and to get you ready for Friday and Saturday’s 2018 NHL Draft, here are some of the main names to keep an eye on.

We have compiled some of the top first-time eligible players to know. One can never truly know who will hear their name called during the draft (especially players who were passed over in previous classes), but here are the players who appeared on NHL Central Scouting’s final rankings that have significant Michigan ties.

He may not be a Michigan native, but he’s a household name at this point – even if he didn’t have two other brothers increasing the prestige of the letters sewn onto the back of his jersey. The University of Michigan defenseman and NTDP alum is undoubtedly a top-10 pick in Friday’s first round; who knows how high he could actually go. After posting five goals and 24 assists for 29 points in 37 games against NCAA competition with the Wolverines, he held his own at the IIHF Men’s World Championship, which solidified his spot as a lottery pick. As we mentioned, he’s the oldest of a trio of Hughes brothers carving out spots in the Michigan hockey scene; middle brother Jack is expected to be the No. 1 overall pick in next year’s NHL Draft after his time with the NTDP comes to a close, and youngest brother Luke – who played for Little Caesars 14U last year – has already committed to Mel Pearson and the Wolverines.

He wasn’t born in Michigan, but he’s been a household name in the Great Lakes State for some time now. After serving as an intimating presence on the blue line for Honeybaked youth teams, the Birmingham native and Plymouth resident led the NTDP Under-18 Team blueliners in goals (12) and points (14). His 12 goals were the most of any NTDP defenseman since Justin Faulk posted the same total in 2009-10. Wilde, who confirmed to MiHockey this week that he will not be joining the Michigan Wolverines next season, is considered a wildcard in this year’s class. After he is selected in the 2018 draft, he will work with his NHL club to figure out what his immediate future holds. His long-term future, of course, will be with whatever team picks him – already at 6-foot-2 and 198 pounds with good hockey IQ, he’s got all the skills needed to thrive at hockey’s highest level.

The future Western Michigan Bronco will most certainly be a first-round pick on Friday night, after an impressive two-year run with the NTDP. Samuelsson served as Team USA’s captain for their 2018 Under-18 World Championship – the culminating tournament for the NTDP players during their two-year stay in Plymouth. His brother is already skating with Andy Murray’s program in Kalamazoo; if Samuelsson makes it there, too, he will be a dominating presence on the Broncos’ blue line.

Andrei Svechnikov – Former Muskegon Lumberjacks star and brother of Red Wings forward Evgeny
Matej Pekar – A Muskegon Lumberjacks forward who played youth hockey for Jimmy John’s and the Oakland Jr. Grizzlies
Brady Tkachuk – A NTDP alum that’s part of one of American hockey’s leading families
Oliver Wahlstrom – A NTDP alum who has been a viral sensation and a thrilling goal-scorer in Plymouth
K’Andre Miller – A NTDP alum who has been a remarkable talent on the blue line

The Jackson native and Saginaw Spirit forward has long been considered a top product coming out of the state of Michigan. Jenkins was named to the OHL First All-Rookie Team after posting 20 goals and 24 assists for a total of 44 points in 68 games with the Spirit in 2017-18. Those 44 points were good for fifth among all OHL rookies. Jenkins also spent one season with the NTDP before deciding to leave for Saginaw.

The Flint Firebirds’ star led his team in scoring in 2017-18, as Dellandrea registered 27 goals and 32 assists for 59 points in 67 games. That’s more than double in all categories from Year 1 from Year 2 for the potential first-round NHL Draft pick.

MORE: A look at potential Red Wings targets for the 2018 NHL Draft

The Rochester Hills native is the son of a coach, and it shows on the ice. Gruden, who finished fourth on the NTDP Under-18 Team in scoring with 28 goals and 32 assists for 60 points in 61 games, may not be the biggest guy on the ice, but does his job in all three zones. His father, John, coached at the NTDP during the majority of Gruden’s youth, establishing a sense of pride in the national program for the future draftee, and he made his two seasons count. He’s a Miami commit, as well.

After making the jump to the OHL for 2017-18, Regula thrived with the London Knights, posting 25 points in 67 games for the storied junior franchise. A West Bloomfield native, Regula carries the torch for high school hockey, having played two season for Cranbrook before beginning his junior career.

In 2016-17, the Jackson native split time between the Muskegon Lumberjacks and the eventual 16U national championship Compuware squad. This year, Everett decided to head to Saginaw, where he posted 20 points in 58 games with the Spirit. He knows what to do in the defensive zone, and he’s got an offensive upside at the same time.

The 2016-17 NAHL Rookie of the Year just keeps thriving and improving his draft stock. Cotter, a Canton native, has been projected to go early Saturday morning in Day 2 of the draft, and rightfully so. The Western Michigan commit posted 39 points in 51 games with the Lincoln Stars this year, his first in the USHL. He’s not afraid to mix it up, either – 64 penalty minutes in 2017-18, after 103 the year before in the NAHL. He will be competing for a spot on Team USA’s World Junior roster this summer at the World Junior Summer Showcase, as well.

One of two Krygiers on this list, and yeah, they’re related. The first of the Krygier identical twins on the final NHL Central Scouting draft list, Cole is a one inch taller than his brother, and he’s got bragging rights at the moment, as he posted 16 points – seven more than his brother – in the 2017-18 USHL season. A Michigan State signee (just like his brother), Cole is the son of a coach; father Todd, a former NHLer, is now an assistant coach at Western Michigan after serving as the head coach of the Muskegon Lumberjacks for three years. He will play against his dad starting next season, when he joins Danton Cole’s Spartans in East Lansing.

The other identical twin in the Krygier family, Christian racked up 137 penalty minutes this year with the twins’ Lincoln Stars – 30 more than his brother. In not so surprising news, he’s joining his brother in East Lansing next fall, too. Not mentioned in the previous write-up, they’re the younger brothers of Brock Krygier, who play defense for Michigan State and Arizona State.

He went north to the Ontario Junior Hockey League, and it worked out well for Carlile, who won a league championship with the Wellington Dukes. He posted 39 points in 54 games with OJHL champs, and in the process, put his name on the draft watch boards.

The top goaltender on our list, DeRidder makes up for a lack of size with athleticism and poise between the pipes. He posted a 26-10-0-1 record in his lone season with the NTDP; he was added after an outstanding rookie season with the Cedar Rapids RoughRiders in 2016-17. DeRidder posted a perfect 15-0 record in USHL play this season. On the year, he recorded a 2.67 goals-against average and .899 save percentage.

Donofrio decided to head to the ‘O’ for the 2017-18 season, and it paid off, as his Hamilton Bulldogs captured an OHL title and made an appearance in the Memorial Cup. For the young goaltender, he appeared in 17 games, recording a 3.14 goals-against average, a .884 save percentage and one shutout.

For a full list of Michigan names and connections who may be selected during the two-day draft, click here.