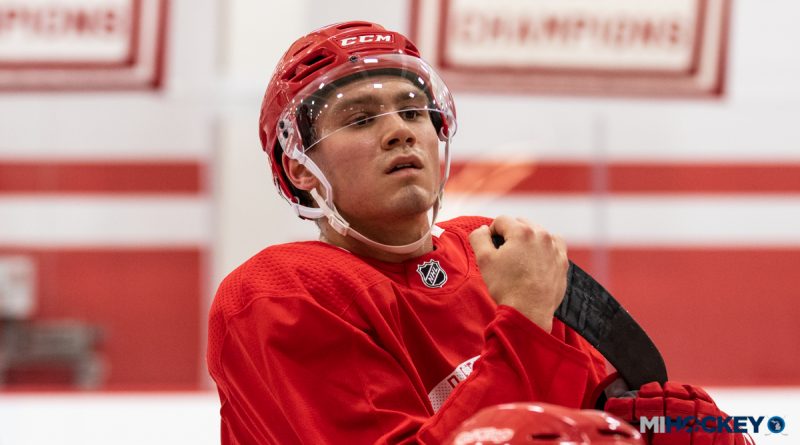 DETROIT – Luke Morgan’s been patiently waiting for his chance to suit up for the Michigan Wolverines.

This week, he’s got quite the distraction – and quite the experience – to help with the wait.

The Brighton native, who transferred to Michigan from Lake Superior State last summer, had to sit out the 2017-18 season, as is NCAA policy.

This week he’s getting the opportunity to knock off some of the rust that comes with missing a year of hockey, as he was one of the few special invites to the Detroit Red Wings’ development camp at Little Caesars Arena.

“It’s great,” Morgan told MiHockey. “I love being close to home and it’s a real opportunity for me, especially because I had to sit out all year. It’s great to be back on the ice with some different competition. Just trying to live it up and learn from every moment that I’m here.”

The Brighton native, as expected, grew up a big fan of the Wings. Putting a Winged Wheel jersey on for the first time yesterday was something special for Morgan.

“Oh, it was unbelievable,” Morgan said. “It’s like shell-shock, a little bit. Kind of like Picture Day when I put the Michigan jersey on. Kind of like that.”

Favorite pro team, favorite college – it’s been a good stretch for Morgan. He will have another memorable moment in October when he gets to finally play for the Wolverines.

“Oh, I’m so excited,” he said. “It’s been a long wait, but I’m getting closer every day, training every day up at South Campus. We got the ice back in, so it’s real nice – I’m getting excited, I’m getting really excited.”

Watching from afar during the Wolverines’ run to the Frozen Four was tough, but Morgan said that his teammates made him feel included.

“Definitely – everyone invited me in to be a part of the team. I loved the experience and everything. It hurt just as much when that goal went in, but we’ll be back next year.”

“It was great; he was super helpful. I wasn’t in there obviously on the road and stuff, so I don’t know what happened there, but I heard everyone loves it. He’s been so helpful for me, because some days it’s rough sitting out. He was so helpful, motivating me every day, and we’re getting closer every day. I love it there – all the coaches, they’re great.”

For now, he’s just trying to capitalize on his opportunity with the Wings.

And unlike most of his peers, he’s already checked out most of the facilities at the new Little Caesars Arena.

“I came in over the Christmas break; I was skating with my old Little Caesars team. Just messing around, so I’ve been in the building, but, the first time in here and seeing all the new stuff, it’s great. All the facilities are unreal.”