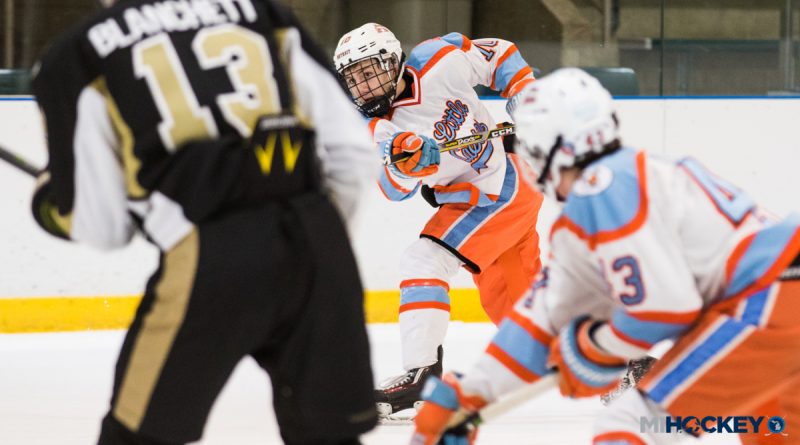 A 2003 birth-year defenseman is off the market.

On St. Patrick’s Day, Ethan Straky announced that he had verbally committed to the Fighting Irish.

“I chose Notre Dame first and foremost because of the people,” Straky told MiHockey. “Coach (Jeff) Jackson and Coach (Andy) Slaggert impressed me with their knowledge and their expectations for their athletes. Coach (Paul) Pooley is also a great coach with an outstanding background.

“Everyone I met associated with the hockey program and the school were welcoming and impressive.”

The blueliner just wrapped up his MAHA season with the Little Caesars 14U squad – the team claimed a Silver Stick title in January.

“For as long as I can remember, my goal has been to play college hockey,” he said. “I am passionate about the sport but I also realize how important it is to have a good education. Having the opportunity to play hockey at a school that has an amazing hockey program and is also known for exceptional academics is the ultimate for me.”

And he pointed out there’s plenty more to love about the team in South Bend than just their recent Big Ten title.

“The campus is beautiful and the hockey facilities are second to none,” Straky said. “The academics are great and I love the Catholic aspect. It truly feels like the perfect fit for me as a person, a student and a player.”