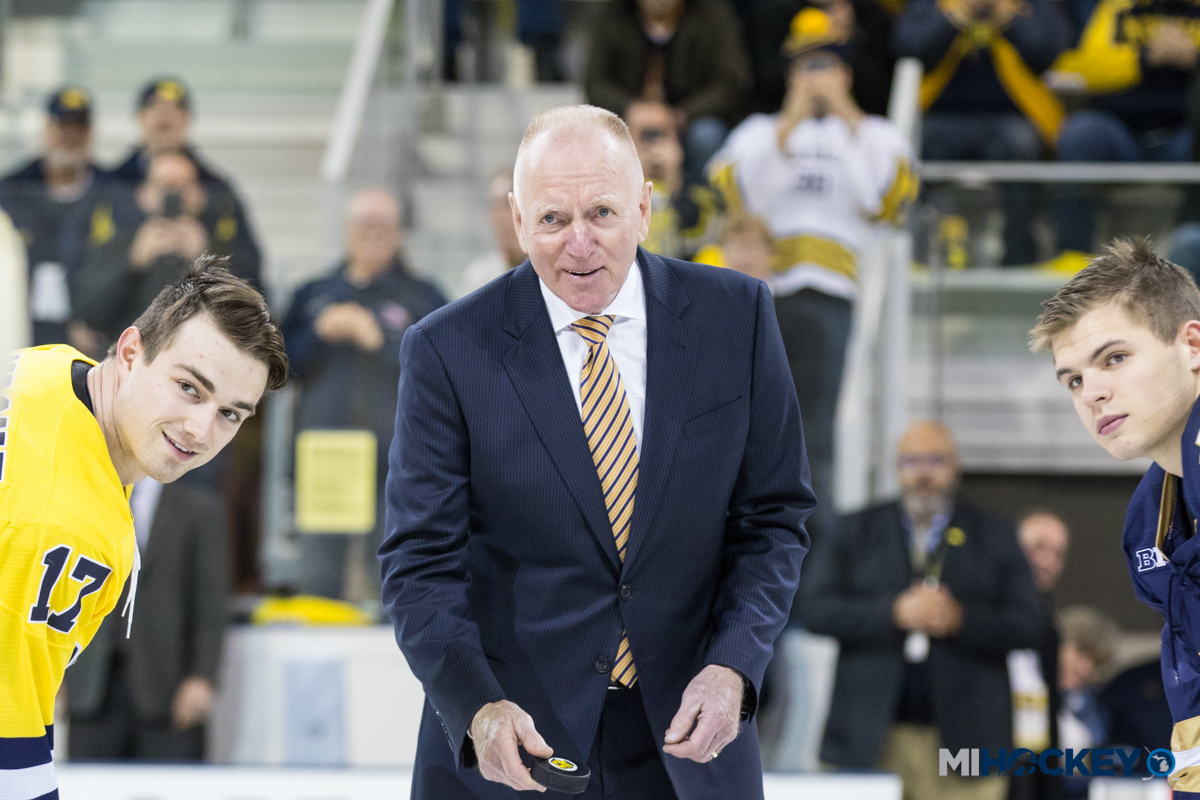 On a more serious note, Berenson followed with, “it’s good – if they did it for a week or a month, I’d be happy. I’m not asking for, not expecting anything.”

Not a surprise, of course. In fact, it was a little bit of a surprise that they even got him to walk to center ice for a ceremonial puck drop on the day of the ‘Red Berenson Rink’ official dedication.

The ice rink inside of iconic Yost Ice Arena is now named after him. He only smiled when instructed to by the photographers for the puck drop.

“The president told me a month or two ago that this was going to happen,” Berenson told members of the media during the first intermission of the night taking part in his honor. “It’s not like this was a surprise now. It was a surprise then. We’ve had time to think about it. I’ve been out public skating. It is different. I don’t get carried away with these things but I really appreciate the gesture from the athletic department. I am thankful for all of the good teams and the good players we have had at Michigan over my time and good coaches.

“You don’t do this by yourself. It takes a lot of good people. I was lucky I was at a school like Michigan. Good things happen at Michigan.”

When asked about all of the UM players wearing his jersey for warm-ups, he said he was just startled by one particular player wearing the ‘C’ on his chest.

“The first guy I noticed was Cutler Martin,” Berenson said. “I go, is cutler wearing the ‘C’ tonight? Then I realized, they are all wearing the C.”

Decisions like that aren’t his to worry about anymore, and Berenson insists he’s fine with it.

“It’s been good,” the 33-season Wolverines bench boss said. “I don’t lose any sleep if our power play is not working or if our goalie doesn’t play well or whatever. I’ve let it go. Like I’ve told Mel, you’ve got the keys to the car. Go for it. I am out of the loop. I will be here for you if you need me. In the meantime, I am happy with my decision, and I am happy with the decision to bring Mel Pearson back.”

At the time of the media scrum, his Wolverines were trailing 2-1 to Notre Dame. What kind of message would he give the players if he were in the locker room with them?

“I would just remind them of the great opportunity they have to play at Michigan, and bring what they can bring to Michigan. It’s not what Michigan’s going to do for you; what are you going to do for Michigan? We brought you here because you could do this, this, this and this, and are you doing that? Are you living up to that? Are you getting better and making the team better? Are you making people around you proud? They need to be reminded of that every once in a while. It becomes a job, it’s a job, going to school and working hard, but you’ve got to love it if you’re going to do it, and if you’re going to do it, do it well.”

That attitude was certainly reflected in his comments about reflecting on his remarkable coaching career during the rink dedication. He says he had no idea things would play out like this when he returned to his alma mater all those years ago.

“No, I couldn’t imagined it,” Berenson said. “I’ve been lucky. I’ve been really lucky and I’ve been around good people and somehow, I’ve made some kind of a contribution one way or another and here we are today, but you know, when you’re doing those things, you not looking back and you’re not waiting for awards. You’re just doing it. That’s what you want to do and that’s what you try to do and then if you get the right group together, great things can happen, and I was a part of a few good groups and I’ve been lucky to be a part of Michigan.”