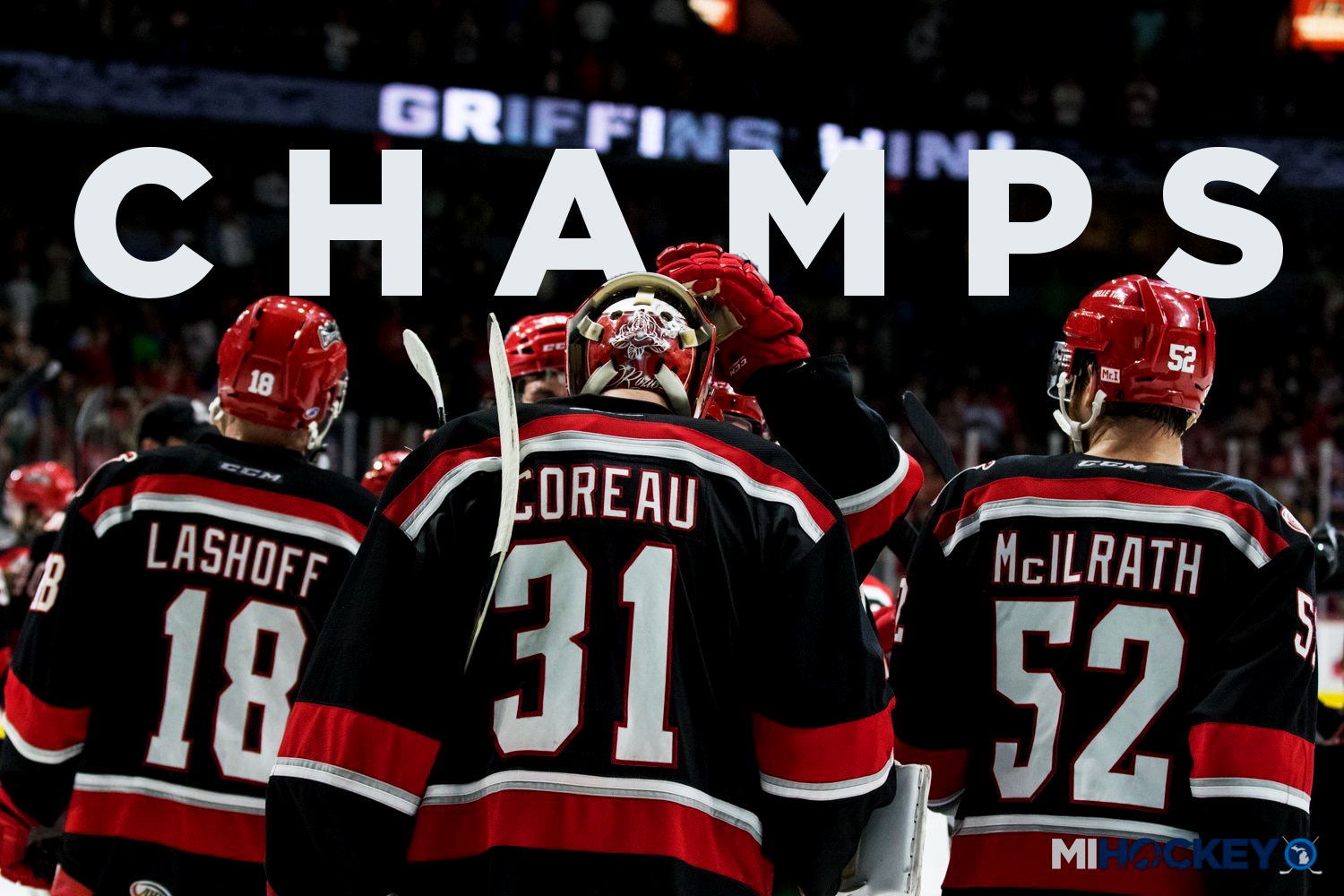 That run, a franchise record for most home wins in a single playoff, served them well one final time as they closed out the Syracuse Crunch in dramatic fashion to capture their second Calder Cup.

In what was a rematch of the 2013 Calder Cup Finals, Tyler Bertuzzi shined brightly in the series-deciding Game 6, as the playoff MVP did all series, potting a momentum-shifting game-tying goal to help lift the Griffins to the AHL crown. Martin Frk scored the game winner and added an assist, while Matthew Ford and Mitch Callahan also scored for Grand Rapids.

Jared Coreau earned the win between the pipes.

“Ever since I came here in ’96, I wanted to be part of a championship team here in Grand Rapids,” Griffins head coach Todd Nelson said. “I’ve been close many times when I was in [Oklahoma City]. It didn’t work out. I lost in this building in 2013 in Game 7. That was a tough pill to swallow, and after I left Edmonton I was looking at a place that if I had to re-establish myself… this job was open. I knew they’d give me a chance to win here. Ryan Martin and Kenny Holland did a wonderful job giving me the right tools, the players to work with. That’s why i came here. I came here for one reason and that’s the Calder Cup.”

In the game, a giveaway by Coreau behind the Griffins’ goal led to Syracuse opening the scoring. Yanni Gourde popped home his eighth goal and 26th point of the postseason, firing the puck into a virtually empty cage at the left circle.

The Griffins had an opportune 37 seconds of 5-on-3 time late in the period, but failed to even the score.

But with 44 seconds of power-play time to start the second period on a separate penalty, Ford capitalized on a turnover to even the score, as he picked the far corner on McKenna. The tally marked Ford’s sixth power-play goal of the postseason, tying a franchise record for most in a single playoff season.

Warren native and AHL Defenseman of the Year Matt Taormina potted his fifth goal and 19th point of the postseason to put the Crunch up 2-1 near the halfway point of the second stanza. University of Michigan and USA Hockey’s National Team Development Program alum Kevin Lynch (Grosse Pointe) drew a helper on Taromina’s go-ahead goal.

But with 8:10 to play in the period, McKenna coughed the puck up behind the Syracuse net, resulting in a Callahan goal – nearly identical to Gourde’s first-period goal for the Crunch.

Gourde then regained the lead for the Crunch, as he was left uncovered in front of the Griffins goal and fired a shot home past Coreau. The Crunch took that 3-2 lead into the dressing room.

At 3:50 of the third period, after Tomas Nosek took a big hit to advance the puck in the Syracuse zone, Frk picked up the puck, walked across the slot and slid a backhand feed to Bertuzzi at the back door for the goal. That evened things up at three aside and also set a new Griffins franchise record for most career postseason goals (23).

“I think he’s just a pretty intense player,” Coreau said of Bertuzzi. “Playoff hockey is his kind of hockey. You don’t know it until you play it. The hits are harder, the shots are faster, everything is just quicker. I don’t know if it’s just hockey sense or sheer will to win and drive to win.”

With 7:19 to play, Frk turned near the right point and fired a slap shot on net that beat McKenna clean to give the Griffins their first lead of the game and the only one they needed.

“That’s my game plan; ‘Marty, shoot the puck. Marty, shoot the puck,” Nelson said. “I was getting on him, he wasn’t shooting the puck as much as I wanted him to and finally he broke free, took the shot and it was a mammoth shot, ends up being the game winner.”

Though it was a back-and-forth affair, Griffins forward Evgeny Svechnikov felt his team brought the potent attack it needed to win in the third period.

“At the end we just bring it all and eventually score our goals and win championship,” Svechnikov said.

“Everything in practice… I think it’s paying off right now. It’s a huge experience and it’s gonna be forever.”

Notes: The Griffins captured the Calder Cup on June 13, marking the record fifth championship-deciding game in league history to fall on that date… As playoff MVP, Tyler Bertuzzi finished the 2016-17 postseason with nine goals and 19 points in 19 games.