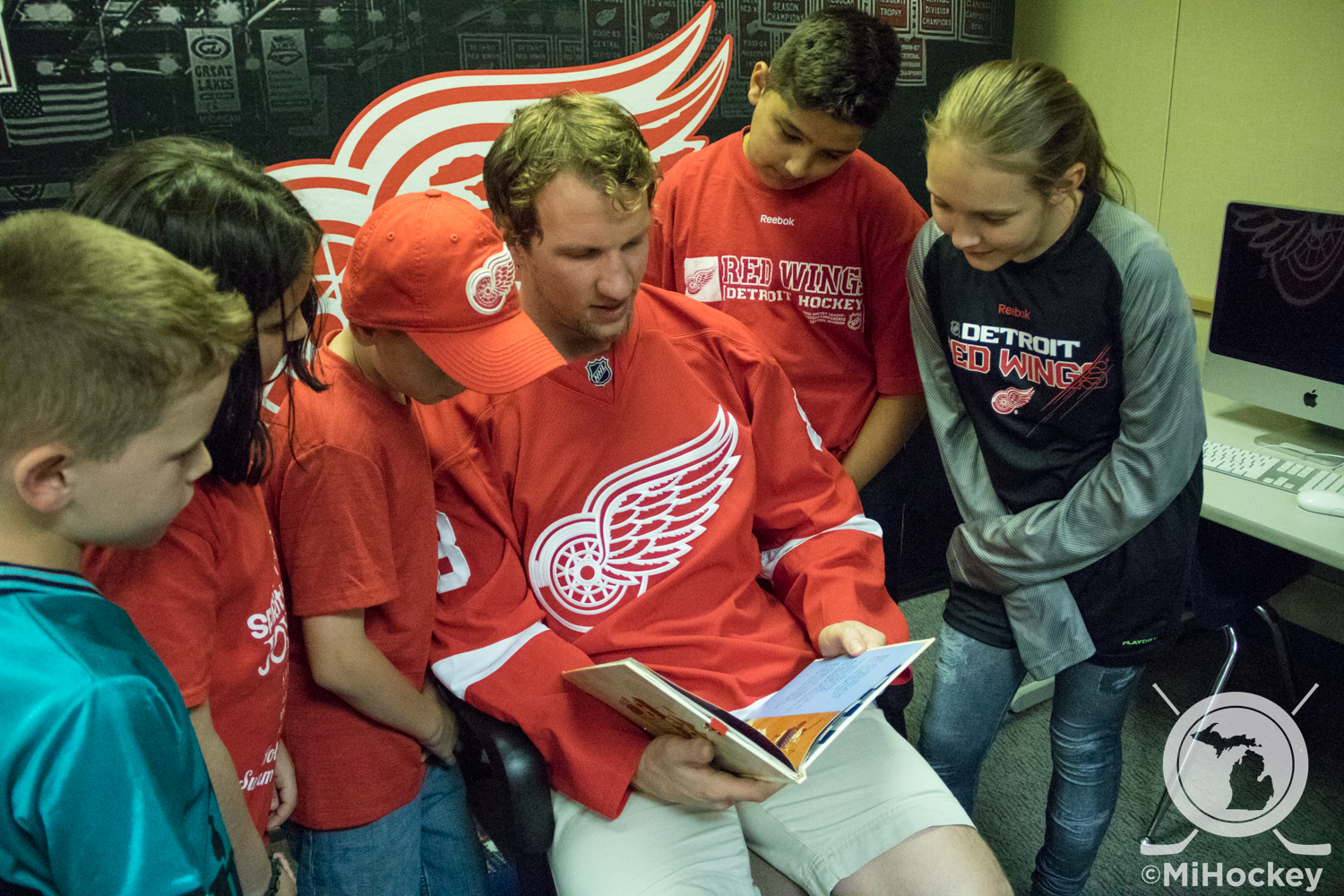 Photo by Michael Caples/MiHockey
Editor's picks For Coaches For Fans For Parents For Players Griffins Pro Red Wings Slideshow The Latest
May 25, 2016May 25, 2016 MiHockey Staff

Red Wings forward and Michigan native Justin Abdelkader paid a visit to the school to celebrate Schuchard’s victory in the statewide Red Wings for Reading program, sponsored by the Michigan Education Savings Program.

Abdelkader read the book “Hooray for Diffendoofer Day!” by Dr. Seuss, Jack Prelutsky and Lane Smith to 50 students Wednesday afternoon, and the reading was broadcasted to the other classrooms throughout the elementary school. At the conclusion of the reading, Abdelkader fielded questions from some of the students, as well.

“It was great,” Abdelkader said after the event. “I always enjoy being around kids and reading to them, hopefully inspiring them. Obviously education is very important and reading is essential, so coming here and inspiring them and them seeing a local athlete come in is great.

“They were all excited, which was nice. They were well-behaved, and I got some great questions.”

A Michigan State alum who finished his degree via summer and online classes, Abdelkader wanted to stress the importance of education to the students he met Wednesday.

“Both my sister and my dad are both educators, so education has always been important in my family,” Abdelkader said. “Obviously I chose to play college hockey, so I knew that having an education would be really important. Being a professional athlete is special, but you never know how long it’s going to last, and to have that education to fall back on and have that accomplishment is pretty special.”

During the student question-and-answer period, one student asked what his biggest accomplishment was, and Abdelkader quickly pointed to his academic achievement of earning his college diploma, not his on-ice successes.

“It’s obviously a huge accomplishment – they asked me what my biggest accomplishment is and I think that’s right up there with all of them. Being able to finish my degree, especially after I left early, I had about 30 credits left, and being able to stay with it and get it done – I think that can go to say that you have your goals and your dreams and aspirations, and you need to stick to them. It can be a positive thing.”

Steve Slancik, principal of Schuchard Elementary School, wanted his students to recognize that with the Abdelkader visit, they had been rewarded for their hard work, and hoped that it would continue to motivate them in the future.

“We’re excited because we put a lot of time and effort into this reading program, not knowing that we would of course be the winning school,” Slancik said. “We had somewhere in the vicinity of 290 kids participate, so it was a huge amount. The reward for that many kids to participate, it’s an awesome reward to get, to show the kids, ‘look, we did this as a school, we beat every school in the state,’ and when you beat every school in the state, you should get something really cool. This is really cool.

The school principal also said that the Red Wings may have acquired a few new fans during the school visit.

“The honest answer is here, at this school, for whatever reason, basketball and soccer are the No. 1 and No. 2 sports, and so I think this is great,” Slancik said. “You would say, ‘you should go where there are a bunch of hockey fans,’ and I would say the opposite. A community like ours, where maybe there’s not as many, this really opened up doors for the kids, ‘maybe I’ll watch hockey, maybe I’ll get into hockey.’ I think us winning probably served the Red Wings’ program the best, because it opened the door to 660 kids who maybe weren’t as big of hockey fans before, but now they are.”

For Abdelkader, he just hopes the kids realized that even though he’s a professional athlete, he still made a point to earn his degree.

“Just how important education is,” the Red Wings’ forward said when asked what he wanted the kids to learn from his visit. “I tried to stress that in my life, and you know, goals and dreams, you have to set your goals and dreams and you should set them high. You want to think big. You don’t want to set the bar too low. You want to set it high and you have to work hard for those.”