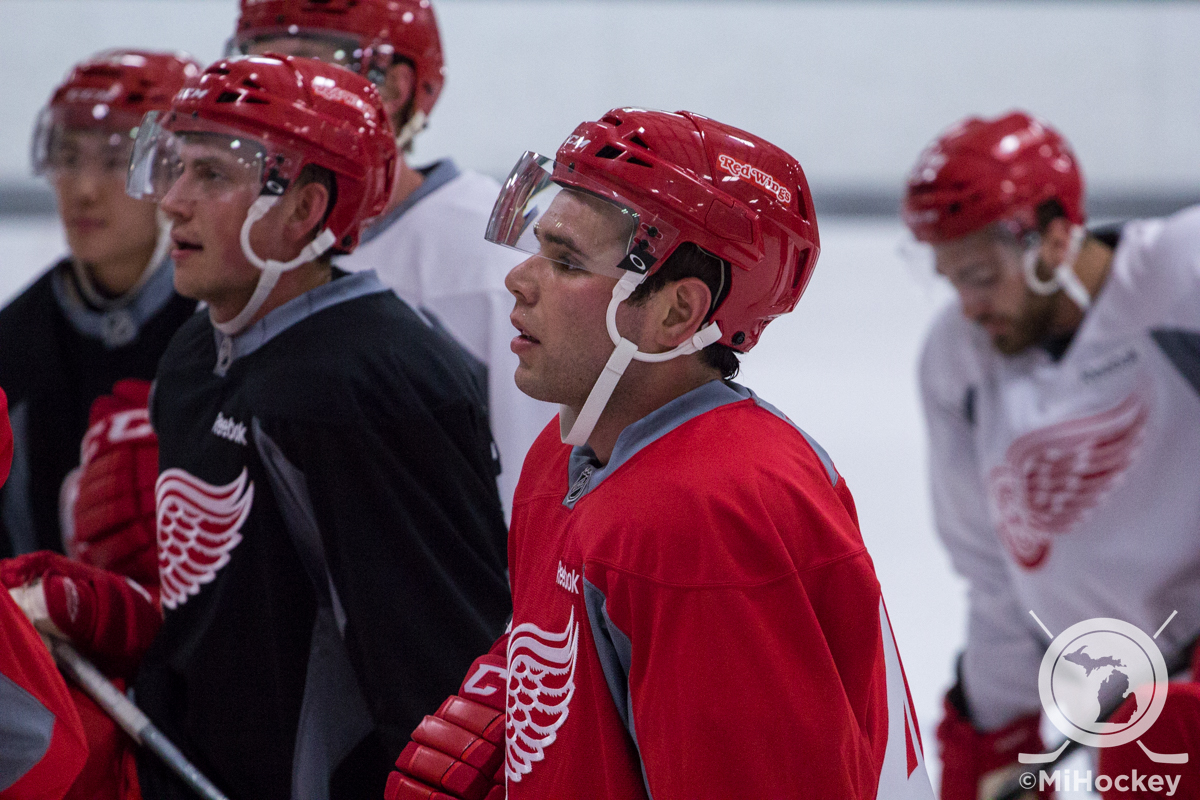 TRAVERSE CITY – The Michigan Wolverines will be looking to replace their top three scorers from this past season.

With Alex Kile on the roster, it’ll be a little bit easier.

The junior from Troy had a breakout 2014-15 season, tallying 26 points in 36 games. Now he’s prepping to take his game to another level by participating in this week’s Detroit Red Wings development camp in Traverse City.

“It’s been pretty crazy,” Kile said. “It’s always been a dream of mine to play for the Red Wings and it’s an honor to be at this camp.”

His sophomore season with the Wolverines caught the eye of Red Wings assistant GM Ryan Martin, who invited Kile to the camp following the Big Ten championship game. The forward said the decision to attend was a “no-brainer.”

“It’s been a learning experience and I’ve really benefitted from it,” he said following Sunday’s practice. “It’s all business here. They have one goal in mind and that’s winning. They’ll teach us everything they can about winning and how to train like a pro.”

After producing 94 points in two seasons with the USHL’s Green Bay Gamblers, Kile had only six in his freshman season at Michigan. But an increase in ice time and an offseason spent determined to get better helped him find his game.

Playing on a Michigan team chocked with offensive talent, Kile finished sixth in points and fourth in goals (13) and shots on goal (100). He led Michigan in power-play goals with seven and excelled in the Big Ten tournament, scoring against Michigan State in the semifinals and against Minnesota in the championship game.

“I came into my sophomore year looking to improve from my freshman year,” the 6-foot, 190 pound Kile said. “I started off the year on a line with (Dylan) Larkin and (Zach) Hyman and that helped my confidence. I had much more ice time this year and with ice time comes confidence, so I think that was the biggest thing for me.”

With Larkin (first on UM in points), Hyman (second) and Andrew Copp (third) all turning pro following this past season, Kile knows he’ll be counted on to produce even more in 2015-16.

“We had our end of the year meetings and the coaches sat me down and said I need to step up my game and lead this offensive group next year,” the Honeybaked product said. “I’m ready for the challenge and I think I have what it takes to take my game to the next level.”

The process continues this week in northern Michigan.

“Coming to this has been a humbling experience,” Kile said. “There are tons of great players with one goal in mind and that’s playing in the NHL. So playing against all these kids is an eye opener for what it’s going to take.”