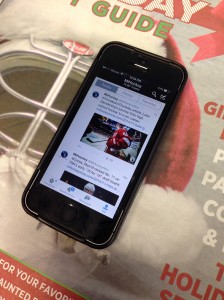 On Nov. 5, the Ontario Hockey League handed out 15-game suspensions to two of their players.

What were they in violation of? The OHL’s ‘social networking policy.’

The suspensions weren’t for headshots or dirty elbows. They were for how the players were conducting themselves on Tinder, a popular social dating app.

For a brief summary that will save you from reading some crude language, they were rather rude to a few girls and typed things that were highly inappropriate. If you want to see what they said – you can click on it here.

The screen captures of the conversations have been making the rounds on social media, and now, the two players won’t be playing hockey for a while.

The CBS Sports article about the entire situation can be found by clicking here. We’re sharing the story because it should serve as a reminder to hockey players (and all human beings, really) on how to conduct themselves in the digital age.

At the start of the season, I took part in ‘media training’ sessions with two high-profile teams in the state. There, public relations staff members discussed with the players how to handle interviews, how to conduct themselves in public and how to handle themselves on social media.

The players in these training sessions laughed as Powerpoint presentations shared some inappropriate social media postings and PR people talked about the ramifications of their actions.

When it’s somebody else messing up, it’s funny. It’s easy to sit back and say, “well that guy’s an idiot; I would never do something like that.”

But you have to be careful. Always. One split-second decision can stick with you for a long, long time.

I have never spoken with a coach, a scout, a recruiting staff or a league representative that has said, “we don’t check the kids out on social media.”

Every single one says, “absolutely we do.”

Why wouldn’t they? How you behave on social media can give your future coaches and your future teams an insight into your personality. Want to give them any reason to doubt you as a player?

The @MiHockeyNow Twitter account follows a majority of the elite hockey players in the state, and even our ‘newsfeed’ shows plenty that no mother would be proud of. A ‘retweet’ can cause problems, too – just ask football star Jadeveon Clowney, who is getting negative attention in the news for ‘liking’ a photo on Instagram while his Houston Texans team was competing without him because he was sick.

Whether you are playing travel, high school, juniors, college, whatever, somebody wants your spot. Hockey is competitive. Life is competitive. Keep your public image clean – or at least clean enough that your mom wouldn’t be mad at you if she saw your social media accounts in their entirety.

Remember, even private messages on Tinder can find their way to the league office. Don’t risk it. Don’t risk your hockey situation, your school situation or your life situation. One funny tweet or one inappropriate picture on Instagram can have a lifetime of consequences.

Keep your nose clean. I know it’s harder than ever, but you are still in control of your social media actions, and you can make sure that they serve you in a positive way, not a negative way.

Signed, a guy who has had his tweets questioned by management before.