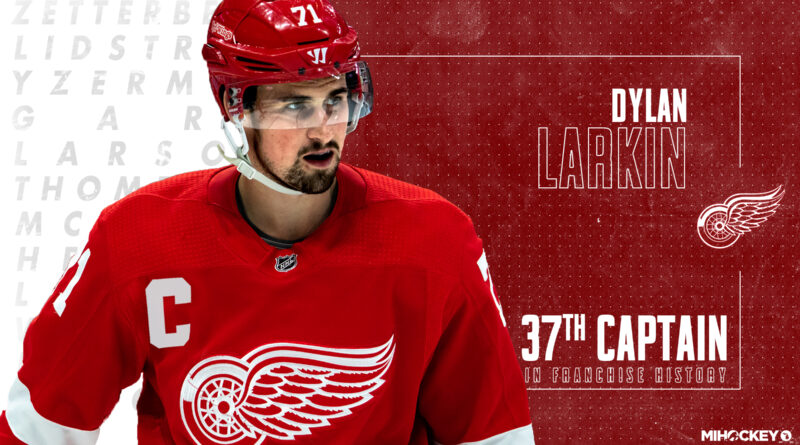 He has spent his entire career in the state of Michigan.

Now, he’ll be wearing the ‘C’ for his hometown team.

The Detroit Red Wings named Dylan Larkin the 37th captain in franchise history on Wednesday, just prior to Thursday’s home opener against Carolina.

Larkin grew up skating for Belle Tire before moving on to USA Hockey’s National Team Development Program, the University of Michigan, a playoff stint with Grand Rapids and ultimately the Red Wings – never truly leaving the state to play.

“Dylan is an extremely competitive and driven player who sets the standard for dedication and conduct for the Red Wings,” said Red Wings executive vice president and general manager Steve Yzerman. “This is the right time to name our new captain and we’re certain Dylan is ready to take on the responsibility. He will be an outstanding leader for us, both on and off the ice.”

Larkin, 24, had served as an alternate captain since 2018-19 and takes over the captaincy that has been vacant for the past two seasons with Henrik Zetterberg’s departure.

“I am extremely excited that Dylan Larkin will be our captain,” said Red Wings head coach and fellow Michigander Jeff Blashill. “To be named captain of the Detroit Red Wings is an enormous honor and one that Dylan has certainly earned. Dylan has the utmost respect from his teammates because of his work ethic, passion, care for others and burning desire to win. I have watched first-hand as Dylan has grown as a leader during his time with the Red Wings and internationally at three World Championships representing Team USA. He is ready for the challenges that come with serving as captain and will be complimented by a great leadership group ready to support him.”

Larkin, the Wings’ 15th overall pick in the 2014 NHL Draft, has skated in 389 games with Detroit since entering the league in 2015-16, posting 107 goals and 159 assists for 266 points. This past season, he led the team in scoring for the third consecutive season, becoming just one of six in franchise history to do so alongside illustrious company: Ted Lindsay, Gordie Howe, Steve Yzerman, Pavel Datsyuk and Henrik Zetterberg.  Per the Red Wings, he also became one of the youngest Detroit player to reach 100 career goals, becoming the sixth player in the last 40 years to reach that mark prior to turning 24 and, at 23 years and five months, was the youngest to do so since Yzerman.