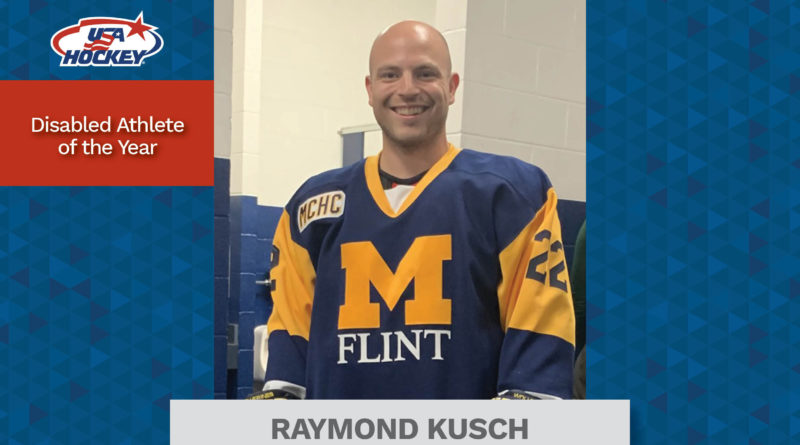 Despite having to change its Annual Congress to a virtual setting for 2020, USA Hockey has proceeded with saluting some of its most impressive members with the governing body’s annual awards.

On Saturday, Raymond Kusch received national recognition for his dedication to the game and the inspiration he has been to his hockey community.

The 29-year-old Clio resident has been named the 2020 USA Hockey Disabled Athlete of the Year.

The former U.S. Army sergeant hasn’t let a prosthetic leg keep him from pursuing his lifelong dream of playing hockey, and he has been thriving in his new sport.

“To be honest with you, this might be the accomplishment that I am most proud of in my civilian life, by far,” Kusch said, via USA Hockey.

Kusch plays for the Spirit Warrior Hockey Team, a squad in the USA Hockey warrior division that is comprised of disabled veterans. He also played a semester for the University of Michigan-Flint’s ACHA Division III program, and had the event not been postponed, he would have represented Team USA in the 2020 International Disabled Hockey World Cup.

“I’ve seen the impact that I’ve had on other disabled people, even able-bodied people, by me going out there and doing it,” Kusch said. “It’s rewarding and it’s purposeful, which are things that I value a lot. I can’t put my finger on it, but when I got the call to say that I’d won this award, it was huge. In fact, it was more than that, it was life changing.”

Growing up in Gibraltar, Kusch always wanted to play hockey, and he got his shot 20 years later.

In between, he enlisted four days after his 17th birthday, and went to basic training between his junior and senior years. After graduating from Carlson High School in May 2009, he deployed to Iraq five months later – Kusch would do a 12-month tour and become a sniper.

In 2012, his team was integrated with a team from Marine Special Operations Command and sent to Afghanistan. It was there that that an improvised explosive device resulted in the loss of his left foot.

To keep reading about Kusch’s remarkable journey, check out the rest of the USA Hockey story on the 2020 Disabled Athlete of the Year.