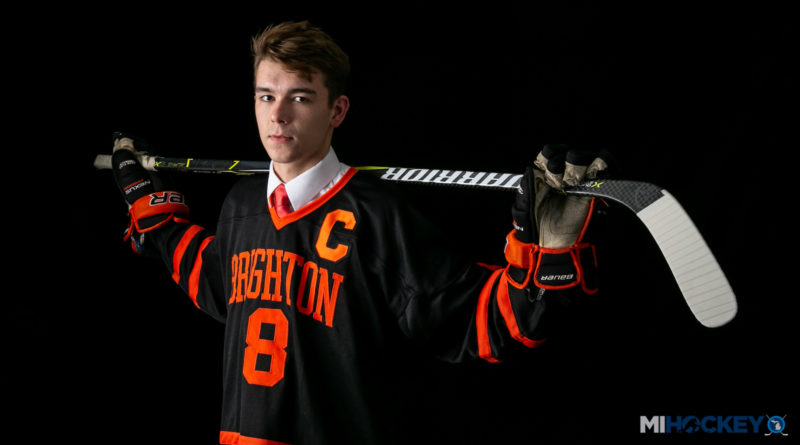 The Northern Michigan Wildcats have locked up another high school hockey star.

Former Brighton standout defenseman Tim Erkkila has announced his commitment to NMU, bringing him much closer to home than where he spent the 2019-2020 season.

Erkkila, the captain of the Brighton varsity squad in 2018-19, spent this year with the Fairbanks Ice Dogs of the NAHL, recording 18 points in 49 games from the blue line.

“I picked NMU because I really got a good feeling about their school and their hockey program in talking to their coaching staff,” Erkkila told MiHockey. “They have a rich history of hockey success that I’m excited to be a part of.”

The Brighton native was a high school hockey Dream Team selection in 2018-19, as well as a first-team all-state selection.

This year, he impressed his Fairbanks head coach with his consistent play on defense.

“He’s very steady and he does have a lot of offensive tools that coaches really appreciate,” Ice Dogs head coach Trevor Stewart said in a release from the NAHL. “He’s on the ice early every single day working on things. He’s just going to be one of those stories where he continues to get better. He’s not going to be the guy that pads the top of points production for defensemen, but he’s going to be an integral part because it’s the little things that he brings to his game.”

When he heads to Marquette, it will be familiar territory, as well, as Erkkila pointed to the abundance of family and friends who have spent time up north.

“Playing college hockey is something I’ve dreamed of my entire life, and to be able to play in the U.P. where my parents, grandpa and countless other friends and relatives have gone to school will be a dream come true.”