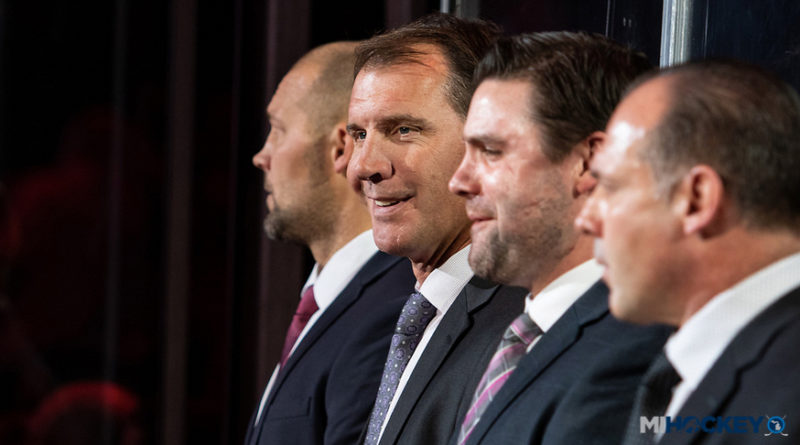 USA Hockey has announced its honorary captains for the inaugural BioSteel All-American Game in Plymouth, and one won’t have far to travel.

Kentwood native and Grand Rapids Griffins assistant coach Mike Knuble will be behind one of the benches at USA Hockey Arena for the Jan. 20 contest; he will be coaching against Scott Gomez.

Knuble, who spent 16 seasons in the NHL after starring for the University of Michigan, will be coaching the NTDP Under-18 Team in the game, while Gomez will lead the USHL All-Star Team on the other side.

“We’re excited to have Scott and Mike as honorary coaches for this game,” said John Vanbiesbrouck, assistant executive director of hockey operations for USA Hockey. “They both had exceptional careers, and while their playing days are behind them, this game gives us a chance to bring back our former greats and have them involved with the next generation of the top players in our nation.”

Joining Gomez on the USHL team bench will be another Michigan native in Mike Hamilton. The Muskegon Lumberjacks’ bench boss has been selected as one of the two USHL coaches to lead the all-star squad in the contest, the other being Sioux Falls’ Scott Owens.

An all-star team from the USHL will take on USA Hockey’s National Team Development Program Under-18 Team in the contest, which is a combination of the All-American Prospects Game and the USHL Top Prospects Game. Here are all the Michigan names invited to represent the USHL squad:

Michigan leads the way with four invitees, not including the players listed above who suited up for Michigan-based youth programs before joining the USHL.

The NTDP Under-18 Team features Michigan names, as well, creating a substantial names-to-watch list for the Great Lakes State’s hockey audience in January.

A full game roster can be seen here. Tickets are on sale now, and they can be purchased here.