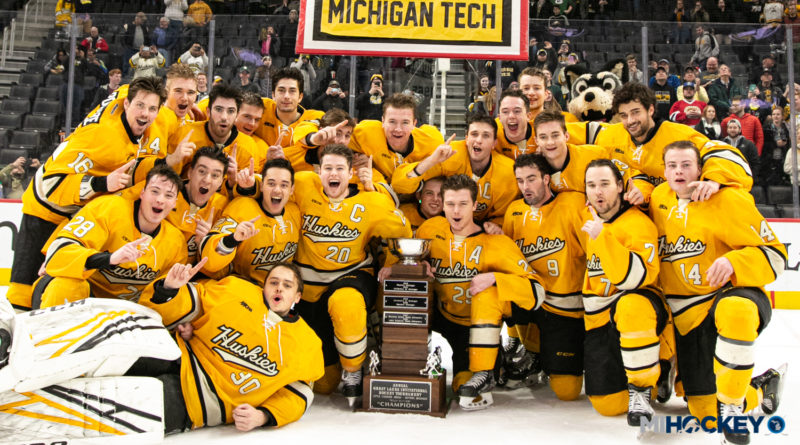 DETROIT – Michigan Tech closed out the decade with a MacInnes Cup.

Not a bad way to ring in the new year.

Howell native Logan Pietila recorded a hat trick to lift the Huskies to a 4-2 Great Lakes Invitational win over the Michigan Wolverines at Little Caesars Arena in Detroit. For Michigan Tech, it marks their 11th title overall and second of the decade. Their last win came in 2012 under Mel Pearson.

After a scoreless first period, Pastujov opened the scoring with his fourth of the season, somehow sneaking a wraparound attempt past Huskies netminder Matt Jurusik. Romeo High School alum and sophomore defenseman Nick Blankenburg drew a helper on the goal.

Just four minutes later, a turnover in the Michigan zone saw MTU’s Pietila (Howell) finish off a Trenton Bliss feed on a quick 2-and-0 out front to even things up at one aside.

But with just 1:32 remaining in the frame, Becker potted his fifth of the season off a feed from Jake Slaker to put his Wolverines back on top heading into the third period.

Pietila struck again for his Huskies, this time at 1:29 of the third period with a wrister from the high slot that fooled Mann and evened things up at two aside.

With 4:20 on the clock, Pietila completed the hat trick as he fired home a quick, nifty feed from at the left face-off circle.

Michigan came close to tying it up late with the goalie pulled for the extra attacker, as Jacob Hayhurst had a great look from the right circle, but could only find the crossbar.

Sophomore Alec Broetzman added an empty-net marker to seal the win for MTU.