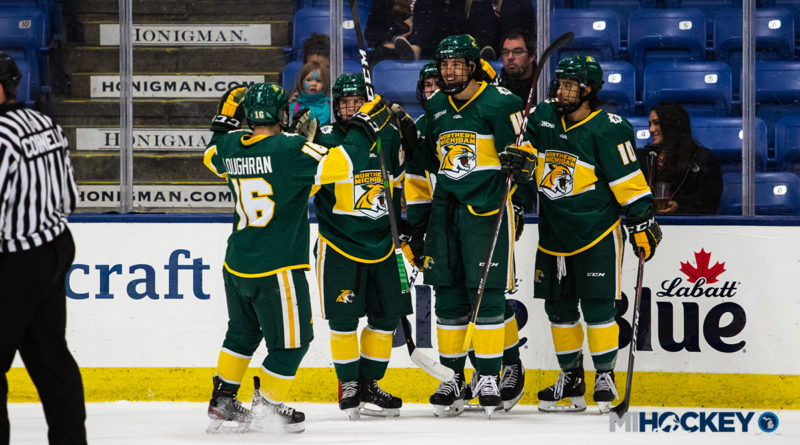 Another weekend set, another sweep for the Wildcats.

No. 20 Northern Michigan improved to 6-1-1, winning their fifth and sixth games on the year, with a sweep over Alabama Huntsville in WCHA action.

Friday’s back-and-forth affair ultimately saw the Wildcats take a 5-3 decision over the winless Chargers. UAH opened the scoring just 16 seconds in, as both teams traded goals early until NMU scored three straight in the second period to take a 4-2 lead heading into the final frame. Though UAH pulled within one in the third period, Wildcats captain Philip Beaulieu scored an empty-net goal to put the game away late, adding to his two helpers on the night.

Saturday brought much of the same, as NMU opened the scoring this time off a Vincent de Mey power-play tally. Caleb Schroer and Andre Ghantous scored second-period goals to give the Wildcats a 3-2 edge heading into the third period.

After scoring a power-play goal Friday, sophomore Griffin Loughran put the game away with an empty-netter with a minute to play. That marked Loughran’s team-leading eighth of the season.

The pair of wins extended NMU’s win streak to five games, and the Wildcats currently sit atop the WCHA standings with a 4-0 mark; NMU is tied with Alaska at 12 points, but the Nanooks currently have two games in hand, both losses, for a 4-2 record.