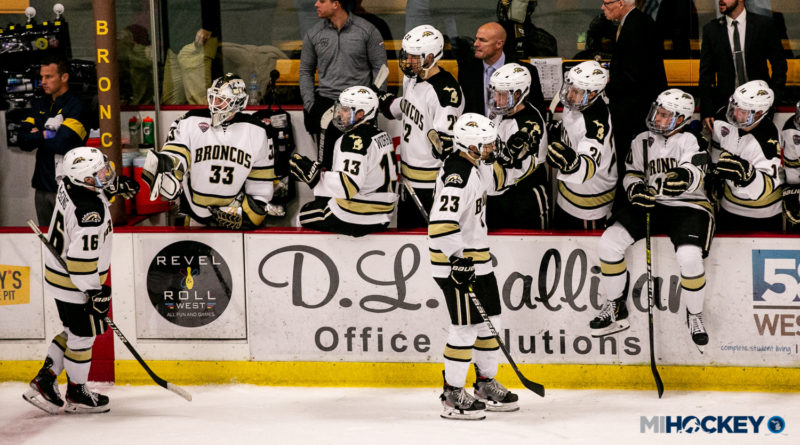 The Broncos started their 2019-2020 NCHC campaign on the road this weekend, but it didn’t bother them too much.

Western Michigan traveled to Colorado College for a pair of games with the Tigers, and they came home with five of the six points available in the weekend series.

After a 6-3 win on Friday, the Broncos and the Tigers played to a 4-4 tie on Saturday before Josh Passolt scored the winner in a sudden-death shootout to decide the extra point in the NCHC standings.

On Friday, the Broncos scored five unanswered goals in the final 22:17 of the contest en route to the aforementioned 6-3 win. Drew Worrad scored a power-play goal three minutes into the second period, which was sandwiched between three different CC goals.

Jason Polin started the Broncos’ comeback at the 17:43 mark of the second period, before third-period goals from Dawson DiPietro, Paul Washe, Worrad and Passolt put the game well out of reach for the home team.

Brandon Bussi was between the pipes for the Game 1 win, stopping 31 shots.

On Saturday, the Broncos jumped out to an early 2-0 lead on goals from Washe and Ronnie Attard. After two goals from CC, Worrad regained the lead for WMU before that was erased by two more strikes from the Tigers.

With 24 seconds remaining in regulation, Attard scored his second of the night to force overtime, where the Broncos eventually prevailed in the shootout.

The Broncos sent 50 shots towards the CC goal in the series finale – the most for WMU since a win over Ferris State in October of 2017.