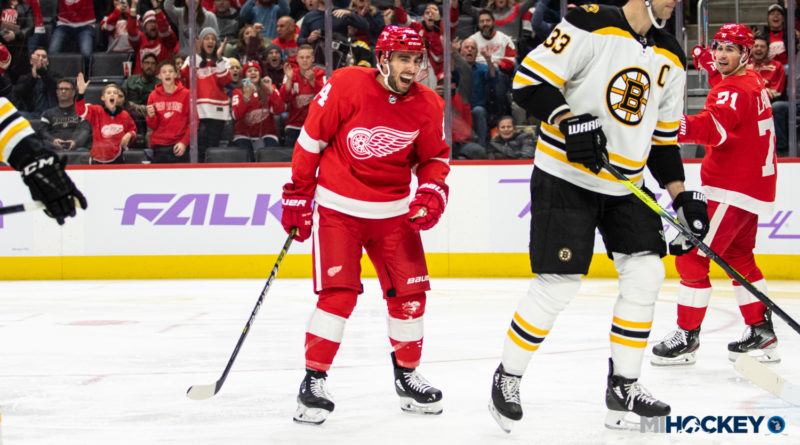 It didn’t take long for the new member of the Detroit Red Wings to make his presence felt.

Robby Fabbri had quite the Hockeytown debut Friday night at Little Caesars Arena.

Acquired in a player-for-player swap with the defending Stanley Cup champion St. Louis Blues for Jacob de la Rose two nights ago, Fabbri scored twice in his first game with his new team.

The two goals – both on the power play – helped lead the Wings to a 4-2 win over the Boston Bruins on the team’s Hockey Fights Cancer Night in Detroit.

Fabbri’s two-goal debut wasn’t the only accomplishment of note, either; Jonathan Bernier recorded two assists from the Red Wings’ crease. Aside from stopping 26 shots, he also factored into Dylan Larkin’s first-period goal, and Anthony Mantha’s empty-netter that sealed the deal for the Winged Wheel.

Tyler Bertuzzi had the primary assist on both of Fabbri’s goals; the two played together for the OHL’s Guelph Storm before their professional careers took them to Detroit and St. Louis.

The fact that the goals came on the power play were an added bonus for Detroit, as the Red Wings were ranked No. 27 in the NHL coming into the night with a 12.7 percent success rate with the man-advantage heading into the contest.

Following a 37-point rookie year, Fabbri played just 83 games over the next three seasons, including missing the entire 2017-18 campaign due to knee injuries.

Check out MiHockey’s first batch of photos from tonight’s game, and stay tuned for the full gallery. (Photos by Stefan Kubus/MiHockey)