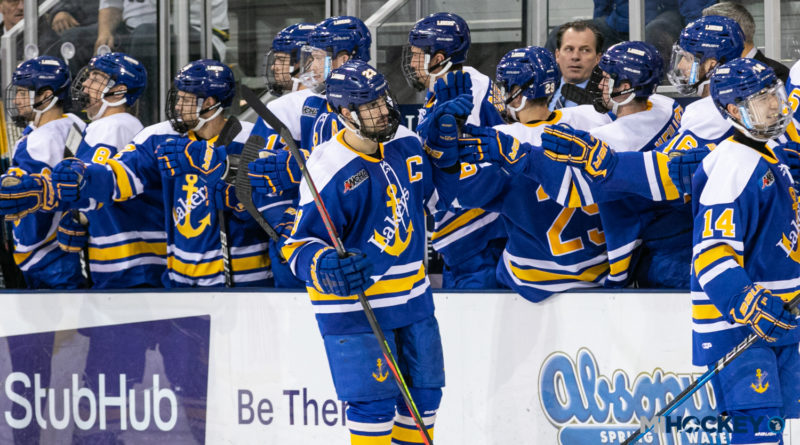 It was a in-state rivalry weekend for the Lakers and the Bulldogs, and LSSU took all the bragging rights.

Lake Superior State hosted Ferris State for a two-game set to start WCHA play and they took advantage of the home ice, recording a 5-4 win on Friday and a 4-3 win on Saturday.

The victories come at a crucial time for the Lakers, as they stop a six-game skid from a non-conference schedule that featured Denver, Michigan and Notre Dame.

On Friday, a third-period surge on two goals from Ashton Calder and one from Collin Saccoman erased a 2-1 Ferris lead; Max Humitz ended up scoring the game-winner in overtime after the Bulldogs had clawed back late in the third.

Pete Veillette also scored in the contest, while Mareks Mitens stopped 25 of the 29 shots sent his way.

Jason Tackett scored twice for the Bulldogs, while Jake Transit and Brenden MacLaren also found the back of the net. Roni Salmenkangas made 34 saves in the loss.

On Saturday, the Lakers scored two goals in the first half of the third period to build up a 4-1 lead that the Bulldogs couldn’t overcome. Saccoman scored twice, while Veillette and Louis Boudon also registered goals for LSSU.

Mitens made 20 saves in his second straight win.

For the Bulldogs, Dallas Tulik scored twice, and Blake Evennou scored a late power-play goal that made it a one-goal game in the final minute-plus.