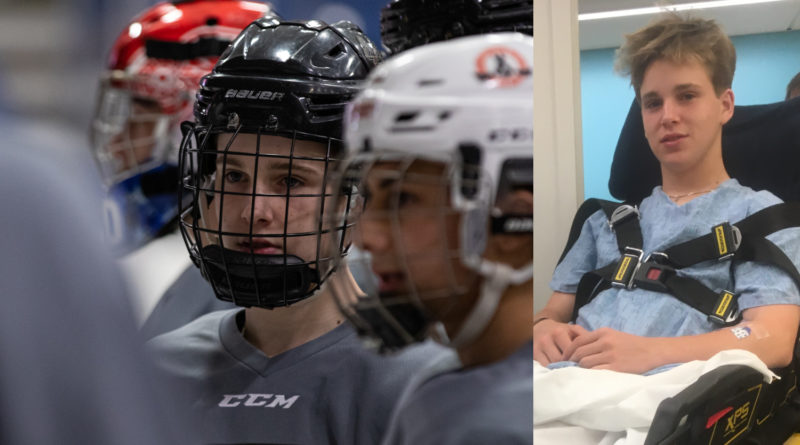 The Oakland Jr. Grizzlies 15-Only team is asking for the hockey community’s support as medical bills rack up for one of their defensemen.

After a routine physical on Aug. 25, Sid McNeill has been sidelined as doctors in both the U.S. and Canada try to address why he has an irregular heart beat.

The GoFundMe account created for McNeill and his family details his cross-country journey of tests and procedures, which is below:

This challenging journey began on Sunday, August 25th when Sid went for a routine physical that was a requirement  for his new school.  This was a Sunday evening after Sid’s team’s training camp weekend where he was so excited to call home and tell how good of a team he was going to have and how well he had did on the ice and in the fitness testing that weekend! He thought he was in much better shape than he had ever been and was loving his new team.

That evening after returning home he had to be brought to the local clinic for his physical.   When there his billet parents called his dad to share that the medical personnel performing the physical had noticed something with Sid heart and irregular heartbeats.  They wanted him taken to the  hospital immediately to be checked further.

He was then taken to the local hospital where the doctor explained that he thought Sid may have arhythmogenic right ventricle cardiomyopathy (ARVC), which is what you hearing that perceived perfectly healthy elite athletes suddenly die from, but thanfully that was ruled out.  Sid was transported by ambulance to The child cardiac Center in Detroit children’s hospital. He was then put through many test including ECG, EKG, ultrasound, heart MRI and stress tests. He was kept in hospital for a couple of days   and was then told he would need further testing and they medicated him to see if they could get the heart rate back to normal.

After a week on the medication and no change in the heart rate they suggested a procedure known as “electrophysiology study with 3D mapping and if anything is found they would do an ablation process while in there.”

With Sid being a Canadian citizen we fought with medical insurance for two weeks to have the procedure performed in Detroit as it could be done immediately! He then went to the Toronto General hospital to see their head Electrophysiologist for more extensive testing and a second opinion. He agreed with first assessment and wanted the same process done and reassured that Sid should not return to sport until we are sure that this can be repaired. He then referred Sid to one of his colleagues in Halifax, NS which is four hours from Sid’s house but is the closest place that performs this procedure.

Sid was then flown to Halifax on Saturday, Sept 14th.  They then spent nine days in   Halifax with Sid having three full days of testing done and then the procedure. After the procedure he was kept in Cardiac intensive care for three days and monitored closely. He was discharged from the Halifax hospital on Tuesday, Sept 24th and has been at home since and allowed to do only light activity.  He had an ECG done on Monday, Sept 30 and had a holter monitor installed for 24 hours and we are waiting the results of these.   They have to return to Halifax on October 8th to see the Electrophysiologist and hopefully will have more news on October 8th.

Sid’s family has incurred many expenses through this scenario as they pay for school to maintain his student visa so he can play hockey and  he has only attended 5 school days this    whole      year … In addition – medical bills in the US are only covered to the same amounts in  Canada and there’s a significant difference. 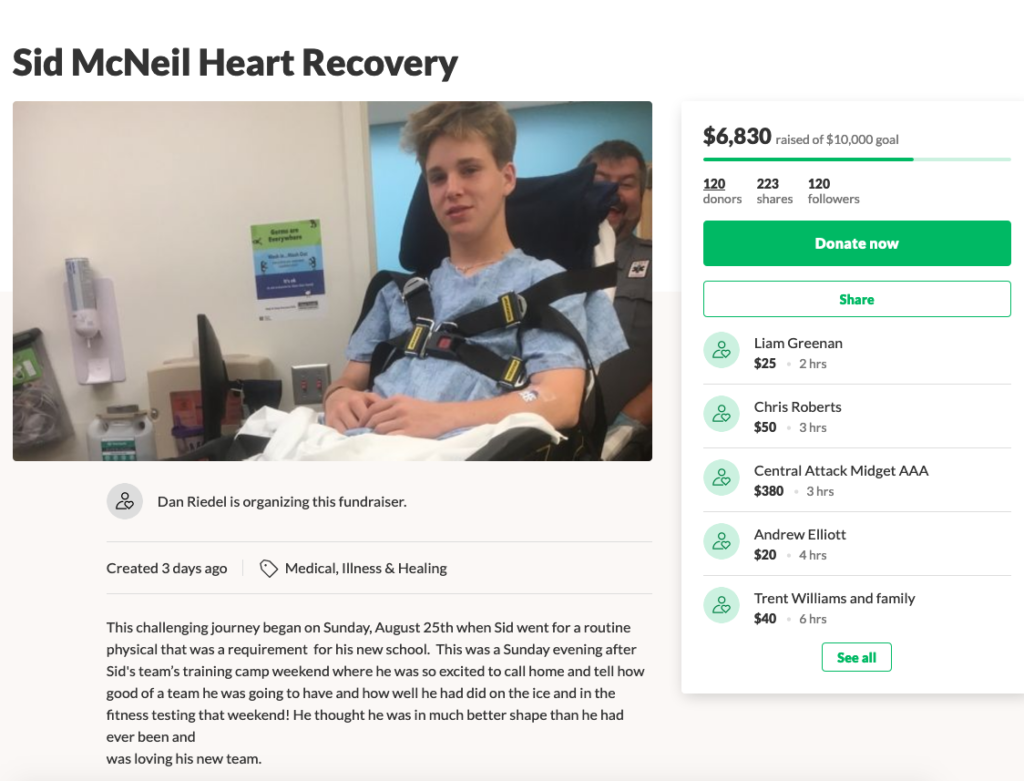