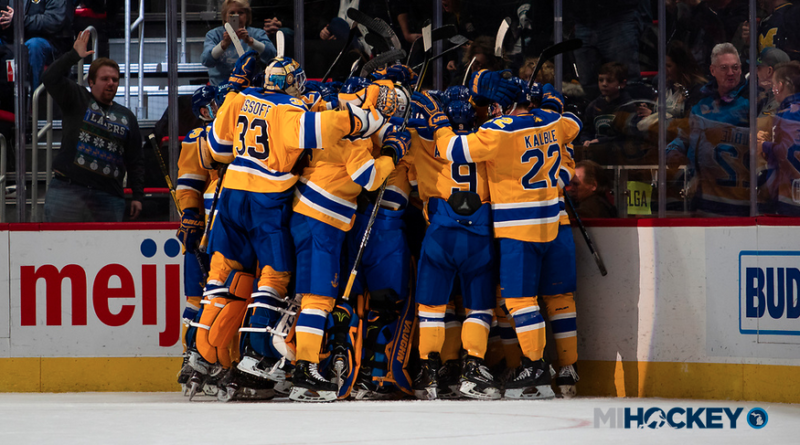 Damon Whitten knows that it doesn’t really matter what you did last season.

At the same time, in the rebuild of a historic college hockey program, big signs of improvement are important to highlight.

In the 2018-19 college hockey season, the Lake Superior State hockey program racked up 23 wins. That’s nine victories more than any of Whitten’s previous, and the most for the Lakers since Jeff Jackson’s final season behind the bench in 1995-96.

When asked if last season’s results – which included a third-place finish in the WCHA and the first Great Lakes Invitational title in school history – marked the turning point his program needs, Whitten said it’s a lot more than a single season.

“I think we’re moving towards that,” Whitten said. “Obviously, the results in the win-loss column reflected it more, but it didn’t happen in one year. It took a much longer process than that, and you kind of saw maybe Diego [Cuglietta] and Gage [Torrel] and Mitch Hults and those guys early on start to do those kinds of things. It was a big point for us, a good season to kind of tip that over. It certainly doesn’t happen in one year, and it doesn’t stay in place just because you did it. We’re working just as hard, just as diligently to continue that culture, to even enhance it. We have another strong leadership group that will replace those guys, and we think we can be better. We think we can get back to the NCAA Tournament, and that’s the goal.”

Success in 2019-2020 will come more so from stopping goals rather than scoring them; the Lakers bring back a wealth of experience between junior goaltender Mareks Mitens and a veteran defensive group.

“When you look at our team, in terms of the make-up of it, starting from the backend out we’ve got an experienced goalie back in Mareks Mitens, he gained some valuable experience the last couple of years. He got almost 20 games his freshman year, dropped a little bit last year because of the year nick had, but we think he’s ready. He played a lot of high-level hockey with the World Junior team in Latvia – he’s played Russia, he’s played Canada, he’s played USA, he’s played in those environments, and he was the only goalie in the country last year to go into Minnesota State and win a game. He’s capable of that, he can steal a game, we need a little bit more consistency out of Marek but we feel really good starting there with him in net, and even better with the experience in front of him.”

The blue line unit – led by senior captain Collin Saccoman and juniors Tyler Anderson, Lukas Kaelble and Will Riedell – will be in charge of anchoring the Lakers’ squad while the offense catches up.

“We return a very talented D core, a very deep D core,” Whitten said. “I was looking, just kind of prepping for this, we’ve got 350 games played among our D core, we return all of our D except for Steven Ruggiero, and that D core is one of the highest-scoring units in the country – I believe about a top-20 team defensively, as well. That certainly is going to have to be very critical for us early on to get good play out of that unit, not just defensively where we think we can take a step and be a little bit tighter, but also continue their offensive production and be strong that way.

“One guy I want to note is one of our few seniors, Collin Saccoman, he’ll be wearing the C for us this year, really a critical player with a good supporting cast. Guys like Lukas Kaelble, (sophomore) Jacob Nordqvist, Will Riedell, Tyler Anderson, that’s that core group that played 350 games and we’ve got good size, good skill and a lot of different attributes we have there. That’s going to be somewhere we’re really good at, because everybody in the country wants to know how we’re going to score again, replace what we lost.”

The LSSU forwards will be tasked with replacing Cuglietta’s 41 points, Anthony Nellis’ 33 and Gage Torrel’s 25 lost to graduation. That trio was just as responsible in their own end, as well, as they played to a combined +56 over the 2018-19 college hockey season.

“I think just like last year, if we would have sat here and said Diego was going to score 25 goals, I probably wouldn’t have taken that stat, but we’re going to look to our seniors again this year to lead us, it’s a group that can contribute in different ways and part of that is offensively. Max Humitz is one of the top three, top five active goal scorers in the NCAA, Max will be one of the few guys that we lean on along with the senior class. Max will be wearing a C for us, one of the co-captains, he’ll be assisted by Brendan McKay. Brayden Gelsinger was another important scorer for us, we’ll look to Brayden to help as well. Ashton Calder was All-WCHA Rookie Team member, he’ll be asked, along with a lot of our other returners and newcomers, to step in and contribute offensively to get back to that same level.”

Whitten said last season’s run to the WCHA semifinals confirmed to both the coaches and the players that they can play with anyone in the country. Nonconference home games with Merrimack and Denver, as well as road trips to Michigan and Notre Dame will let the Lakers know where they stand among the nation’s top programs.

“I think a lot of validation for the things we saw moving forward, not only for the staff but certainly for the players,” Whitten said. “Going into [Minnesota State] Mankato, we were the only team to beat them in there, and they’re the measuring stick. They’ve been so good, not only in the WCHA but nationally. When we got here, there were a lot of different kinds of negative connotations, who we had to beat and where we had home games and we slowly knocked those off one by one over the years, so guys understand that we can play with anybody. Our league, and nationally, it’s so close that you have to be so good every night. The last season doesn’t matter, the last night doesn’t matter.

“We understand that we can play with anybody. We didn’t talk schedule much but we’ve got a tremendous schedule and early on, we’ve got a really strong nonconference schedule so we’re going to know who we are very early on, and we’re excited about that. There’s a belief, we know we can play with anybody in the country, some question marks for sure as there is every year, but our locker room believes and we’ve got the right leadership group in place. We’re excited to hit the ice and show everybody who we are in the 19-20 version of it and get a little bit better.”