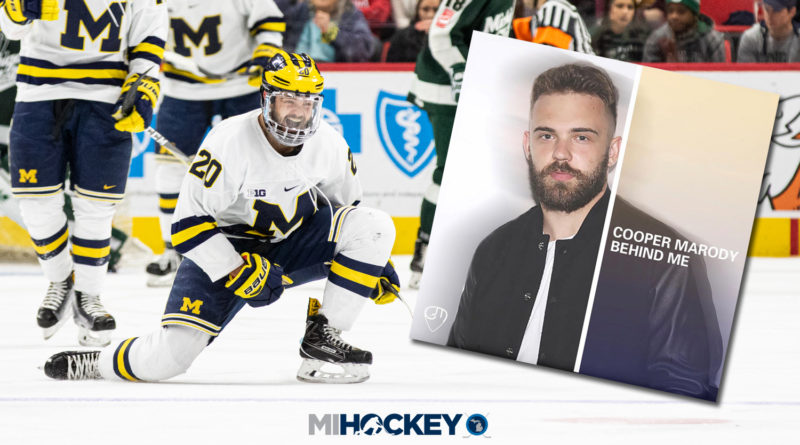 Like most other professional hockey players, Cooper Marody is spending his summer weekdays working out and training for the upcoming season.

His weekends are anything but stereotypical, however, and now he’s got results to show for it.

“Behind Me” – the debut song from the Brighton native – is available on iTunes and Spotify.

“It’s crazy,” Marody told MiHockey on the day the song went live. “It’s something that’s been many years in the making, trying to get the right songs together, continuing to improve myself not vocally but songwriting and also my production skills and things like that. It’s been a long process, but one that I’ve worked really hard to accomplish this, and I’m really happy with the responses I’ve been getting so far with it.”

Marody just wrapped up his first season of professional hockey; he played in six games with the Edmonton Oilers and 58 games with the Bakersfield Condors of the AHL. His musical aspirations have long been documented – read about some of them here in a MiHockey ‘MiStory’ feature he wrote – but this summer was the first time he thought he could truly pursue it.

The University of Michigan product has been training in Michigan during the week and flying down to Nashville each weekend to work on his music with writers/producers Gavin and Gary Garris.

“I work out Monday through Friday, but Friday after workouts, I fly down to Nashville and then come back home on Sunday night. I’ve done that about three times this summer. We write the songs down there, we work on the production down there, sing down there – everything happens in Nashville.

“It’s been awesome. It’s such a cool town. It’s a beautiful area, just outside the city is the beautiful hills of Nashville and you drive 15 minutes and it’s just awesome nature and mountains, hills, cool stuff to look at. There’s such a great energy in the town and I just love going down there and working on music. The guys who I go visit, they’re brothers and they both do music down there, they both produce songs, I work with them. I met them when they were living in Michigan two, three years ago, and we just stayed friends since.”

The former Big Ten scoring champion said he’s very happy with “Behind Me” and how it has been received.

“It’s a great song,” he said with a laugh. “It’s a good song. It’s one that I wrote with my buddy in Nashville and we feel really happy about it. It’s a song about going through life and making mistakes and learning from it and leaving stuff behind you – becoming a better person for it. As I’ve grown in my life, in my faith, and just the way I want to live, I’ve kind of demonstrated through the song of learning lessons, leaving it behind you, being a better person overall and a better man. It’s a message that a lot of people go through, and something I’ve found to be really relatable for people who have listened to it.”

When asked how his NHL team felt about his new music, Marody said that he feels his music makes him a better hockey player.

“I think as long as you play well, you can do what you want. For me, personally, music makes me a way better hockey player. I like to have the mindset of more than just a hockey player. That’s something that’s very important to me. We talked about it before in the article I wrote for MiHockey, the Greg Harden story, give 100-percent in everything you do so when you go to the rink every day, you don’t have so much pressure to succeed because you don’t have to say, ‘this is the only thing in my life, this is my only worth.’ Having other things like music free up your mind and remind yourself of why you’re playing hockey – because you love the game. A lot of times nowadays, people lose touch of the fact that it’s a game, and they forget why they’re playing. They play it just because it’s a way to make money, whereas you can still love the game and play. For me, making music makes me have more confidence going to the rink every day. It makes me enjoy going to the rink every day and working hard, more than anything.

“We have so much free time as hockey players. For example, in the summer time, you work out Monday through Friday, skate a couple times a week, and other than that, you don’t have anything. Even during the season, if you don’t have a game, you have practice and you get home at noon and you have nothing the rest of the day. I would rather fill that time with productive things that are going to access other parts of my brain, other positive things, rather than just worrying about hockey 24/7. That causes way more problems than not worrying about 24/7. You have to have other things to get your mind off it.”

Having the support of his hockey family has meant a lot to Marody, as well. He has made quite a few friends during his hockey travels – from Orchard Lake St. Mary’s, to the USHL with the Muskegon Lumberjacks and the Sioux Falls Stampede, to the NCAA with the Wolverines – and he said his musical aspirations have always been celebrated.

“It’s great. Every team I’ve played on, when I really started doing the music thing, the players have really respected me for it, and really enjoyed it. The hockey environment, people can be pretty raw and pretty upfront about how they’re feeling, so if they didn’t like it, they were going to tell me. Everybody seems to really enjoy it, and it’s something I’m really thankful for – to be around good buddies who support me in this music thing, because it is different, not everybody does it. I can’t thank them enough for supporting me and wishing me luck with it.”

Marody wants kids to realize that they can be more than just a hockey player.

“I think it’s just important for kids to know that regardless of what they’re doing now, that doesn’t define who they are completely. They are more than just that. When I have put my self-worth only in hockey, I’ve held myself back. I didn’t reach anywhere near my potential. When I let that go, and put my self-worth not just in hockey but in me as a person and everything that I do, I’ve never been a better hockey player. I think that’s important for kids to know.

“Don’t be afraid to do other things. If you have a gift, you can be a hockey player but you can also be an amazing drawer. An amazing painter. A lot of kids are afraid of what their friends are going to say or whatever it is in their life, but don’t be afraid to pursue that. The people who are really genuine and care for you are going to respect you for it and help you with that dream. Don’t be scared to pursue things. I think that’s important for kids to know, especially in the hockey world.

“That mindset has changed my life for the better, and made my hockey career better than I could have ever imagined.”