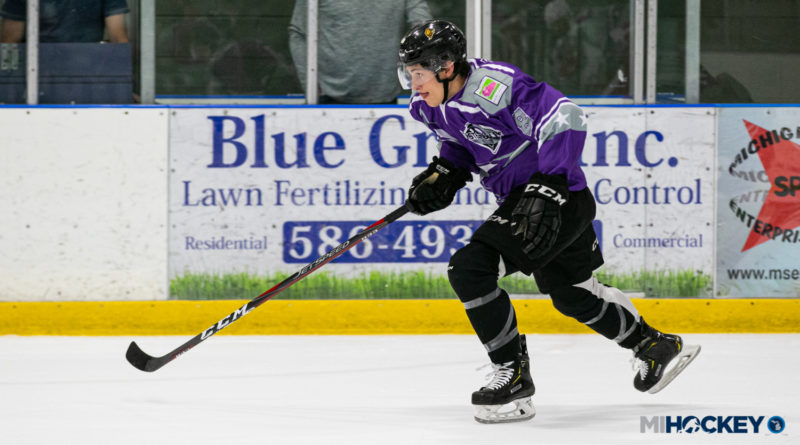 Didn’t take long for the video to blow up, that’s for sure.

MiHockey had a GoPro on the helmet of Dan Oleksy, one of the referees filming the Eastside Elite All-Star Challenge last night at the Mt. Clemens Ice Arena. That’s where Oleksy, brother of Eastside Elite Hockey League founder and commissioner Steven Oleksy, captured a remarkable shootout goal by Plymouth native Antonio Stranges.

Before we could get the GoPro footage shared, another video went viral of the moment. What that video isn’t sharing, however, is what the event is, and why it takes place.

At last night’s @ESEhockey All-Star Challenge, @StevenOleksy made sure the fans would be treated to multiple shootouts.@AntonioStrange3 made sure to deliver. pic.twitter.com/TX9MkwwvwP

The All-Star Challenge is there to both celebrate the league and support charitable causes in the area. This year, they were raising funds for the Cassie Hines Shoes Cancer Foundation, which has a mission “to guide young adults with cancer, to social support programs and services that can help them manage their mental healing as well as their physical battle.”

All of the players wore the No. 8 in the series of three-on-three games last night in tribute to Hines, her number of choice while playing soccer.

Last year, the all-star contest supported four causes – ALS awareness, autism awareness, concussion prevention and the Special Olympics. In 2017, they played for Anthony Mastronardi, a local high school hockey player who was paralyzed from an incident in a game in 2016.

So whether you saw that video, or MiHockey’s, we hope you recognize the work put in the Oleksy family to make this event happen, and the charitable causes associated. Click here to visit the Cassie Hines Shoes Cancer Foundation official website.