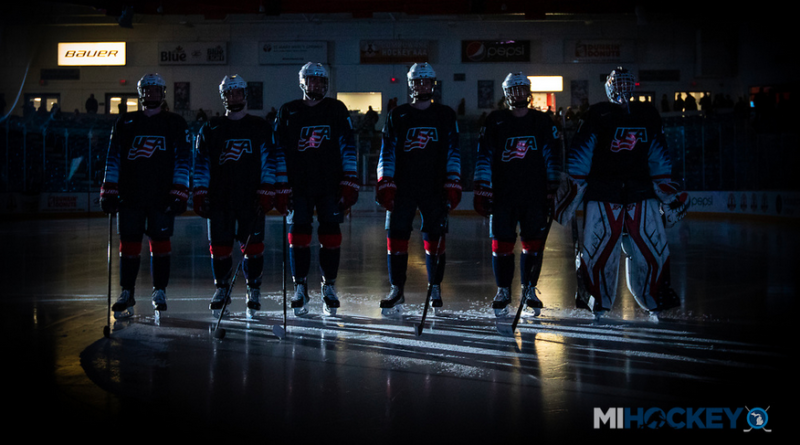 They show up at the end of every summer, full of hype and expectations.

Each class has its fair share of players labeled as elite prospects with major Division 1 college commitments next to their names.

The USA Hockey National Team Development Program’s 2001 birth-year group was something else entirely, however.

Sure, the roster featured Jack Hughes, long identified as the top American-born player in his birth-year. He was phenomenal even in the NTDP Evaluation Camp (tryouts) the previous March. But to say they would be one of the best groups in program history, after some of the other groups USA Hockey had assembled in Plymouth and Ann Arbor in years prior? Lofty, to say the least.

Then they played in their first game.

The new group – having been together for only about three weeks – scored 12 goals against the NAHL’s Minnesota Wilderness.

More impressive was that No. 43 – Hughes’ jersey number in the first year, as NTDP players wear higher numbers in Year 1 of the two-year program – only had two assists.

A special two years in Plymouth was underway, and the rest of the hockey world has been taking notice ever since.

On Friday, the NTDP Under-18 Team is expected to break NHL Draft records for USA Hockey – a fitting end to a remarkable two-year stretch in Plymouth with the NTDP. A record 17 players were invited to the NHL Scouting Combine, and in many mock drafts from scouting experts, five of the top 10 players selected wore the Red, White and Blue in Plymouth this season.

Scott Monaghan, the senior director of the NTDP and an original member of the program since its inception in 1996, said the ’01 class is as remarkable as its billing.

“I think time will truly tell when you see five or six years from now how many guys are at the highest level, but for me, it’s one of the best groups we’ve ever had, and that’s not just on the ice,” said Monaghan, who oversees all aspects of the NTDP in Plymouth. “They were great kids off the ice – we had no real problems socially or academically; the guys did what they were asked to do and they bought in all the way around. When you mix that with talent, that’s how you have the kind of special group that they are.”

The class is headlined by Hughes, obviously. The brother of Wolverines product Quinn (a NTDP alum himself) and Little Caesars defenseman Luke (a NTDP commit for next season), Jack Hughes is expected to be the No. 1 overall selection Friday night when the New Jersey Devils are on the clock. Four other NTDP products have been selected No. 1 overall – Rick DiPietro in 2000, Erik Johnson in 2006, Patrick Kane in 2007 and Auston Matthews in 2016.

Johnson is the only member of that group – currently – that was selected No. 1 overall directly out of the NTDP (which was located out of the Ann Arbor Ice Cube at the time).

Hughes leaves the NTDP as its all-time points and assists leader. The list of accomplishments he had during his time in Plymouth are well-documented, but he wasn’t the only one filling up the scoresheet.

Frequent linemate Cole Caufield scored and scored and scored some more during the two years with the national program – whether he was with Hughes or not. His 5-foot-7 frame didn’t keep him from breaking the all-time goals mark with the NTDP, and it shouldn’t hurt his draft stock the way it did with Farmington Hills native Alex DeBrincat a few years ago.

Yet Caufield isn’t even the No. 2 NTDP player on most draft boards. That honor belongs to Alex Turcotte, who has continued to climb up the lists. A one-time Michigan resident who competed for HoneyBaked during some of his formative years, Turcotte finished second on the team in points-per-game, with 1.68. He missed 27 games this season, but that hasn’t prevented talks of him going as high as No. 3 overall.

Then there’s Trevor Zegras, who is expected to go in the top 10, as well. Another exceptional talent who, most years, would be the top player available from a particular NTDP class. Not familiar with him? You should be, he’s floating around in the middle of the top 10 group, and the Red Wings select at No. 6….

That’s just a first glance at the forwards; we haven’t even gotten to Matthew Boldy, who is ranked No. 9 among all North American skaters by NHL Central Scouting, or Michigan commit Johnny Beecher, who checks in at No. 49.

Nor have we talked about the defenseman; Michigan commit Cam York leads the group at No. 12 on Central Scouting. He broke the two-year points total for a NTDP defenseman with 103.

First goalie selected this year? That should be Spencer Knight, and his crease partner, Cam Rowe, should be selected, as well. Coach John Wroblewski had the option of playing the No. 1-ranked goaltender in Knight, or the No. 4-ranked netminder in Rowe, each time he set his line-up.

They’re all well on their way to reaching the NHL, while the guy who assembled the roster is already there.

Jeremiah Crowe was the director of player personnel at the time of this class’ recruitment, and he is now on the scouting staff for the Buffalo Sabres.

“…you can see why he’s with Buffalo,” Monaghan said. “That’s how good he is. He found all the right guys, and it’s not just the obvious. It’s guys like Judd Caulfield and Case McCarthy, guys who brought a great deal of depth to our line-up. We’ve had groups with great top-end talent, and guys underneath were just OK players or we just weren’t that deep – this group was deep. Any given night, anyone could sting you, any defenseman could make a huge play and both goalies were tremendous – it’s hard to find two world-class goalies in one age group.”

Here is a look at all of the NTDP Under-18 Team players on the final NHL Central Scouting rankings for North American skaters/goaltenders:

The six players listed in the top 12 create exciting possibilities for Friday’s first round of the NHL Draft; never have there been more than three players selected directly from the national program in the first round.

The U18 Team’s depth from top to bottom is why the team found tremendous success in their two-year stay in Plymouth. They played a substantial role in the NTDP reaching the USHL playoffs in back-to-back campaigns. In 2017-18 as the Under-17 Team, holding their own as a group of 16-year-olds playing against players as old as 20 in their first taste of junior hockey to win enough games to keep up with the upperclassmen of the U18s. Despite five of them joining Team USA at the Under-18 World Championship, the Under-17 Team represented the NTDP in the USHL playoffs and not only won a playoff round for the first time, but also advanced to the Eastern Conference final.

In international play, the U18s finished 29-2-1 over the two seasons. In 2017-18, they were 14-0; in 2018-19, they were 15-2-1. They won four of the six tournaments they played in, and as Monaghan pointed out in an answer to how this club managed to handle ‘the hype’ surrounding them all year, the fact that only winning bronze at the 2019 Under-18 World Championship was viewed as a disappointment is a statement in itself.

“The whole group, from the media onslaught with Jack and many others, to the…I’ve never seen the number of NHL interviews that we did with this group,” Monaghan said. “Almost every kid constantly, every team, and I give them a lot of credit because they never let that distract them from the goal of succeeding as a team. Even though they didn’t ultimately win the World Championship, they performed well at the World Championship and they came home with a bronze medal.

“Fifteen years ago, in the U.S., we would have been thrilled to come home with a bronze medal. That’s how far we’ve come, and you know, for them, that’s in their mind going forward. Those kids are going to play for Team USA again at some level, and they’re going to remember the disappointment of that loss and it’s going to drive them to succeed down the road.”

Some highlights from over the two years through tweets on the subject:

With a 10-3 win tonight, the @USAHockeyNTDP has secured a spot in the @USHL playoffs for the first time since 2011-12.

Here we have @umichhockey commit @camyork2 celebrating his power-play goal that gives him the record for most points as a defenseman in @USAHockeyNTDP history. pic.twitter.com/vHUH4KhGrp

In the Hughes family edition of the annual @USAHockeyNTDP vs. @umichhockey game, it was Jack’s team coming out on top.

For #SensoryFriendlyDay at the @USAHockeyNTDP game yesterday, the anthem was performed without a microphone/sound system. The players helped, but it was off-ice conditioning coach Kirk Culik who led the way volume-wise. pic.twitter.com/KsqkHvGLVi

Last night, the @USAHockeyNTDP Under-18 Team beat No. 1-ranked St. Cloud State on the road in their latest @collegehockey battle.

…and it happened on the same play.