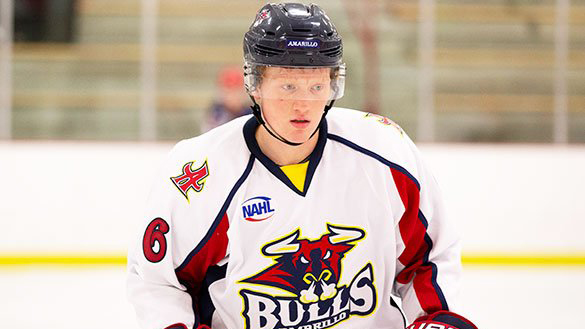 Jake Willets’ hockey journey took him all the way to Alaska and Texas the past two seasons, but he’s coming back home because of it.

The Erie native has committed to Michigan Tech for the upcoming school year.

“I picked Ferris State because I felt like I really connected with the coaches well, it had a great hockey history, the fan support is great, and I’m able to play in my home state,” Willets told MiHockey. “It’s all around a perfect fit for me and my family and I can’t wait to head to Big Rapids this fall!”

From there, he earned a spot with the Fairbanks Ice Dogs of the NAHL for the 2017-18 season. Willets racked up 12 points in 46 games, while playing to a +21 rating.

This past season, he made a major jump in the scoring column, as Willets racked up 41 points for the Amarillo Bulls. He recorded another +21 season, and he also found his way to 133 penalty minutes.

The former SMCC standout for hockey, baseball and football had more to say about being able to play for a Michigan school in a NAHL.com story, as well.

“This has been a dream come true something you work hard your entire life for,” Willets said. “It is so overwhelming to play Division 1 hockey in your home state. Some kids may not have an opportunity to do so. I was very excited and relieved to get this completed. I’m very excited and it’s perfect for me and my family.”