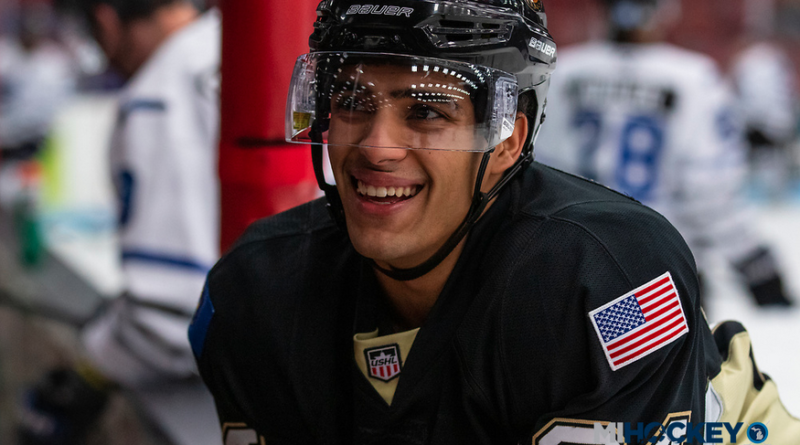 Jagger Joshua has signed his National Letter of Intent, and the Spartans have made it official.

The Dearborn native and Muskegon Lumberjacks forward will be joining MSU for the 2019-2020 season.

Joshua, 20, checks in at 6-foot-3 and 196 pounds. He is the younger brother of Ohio State standout Dakota Joshua.

“Jagger is a big, physical player that will contribute greatly to the way we want to play and help us in the battles of the Big Ten,” coach Danton Cole said in the team’s release. “He has tremendous upside that we look forward to working with here at Spartan Hockey.”

He recorded 27 points with the ‘Jacks this past season, helping Muskegon to a USHL regular-season conference title.

The Michigan State Spartans have announced the signings of two players for the 2019-2020 NCAA hockey season.

One’s from right down the street; one’s from…Switzerland.

The Spartans’ freshman class will include Oak Park native Josh Nodler and Arisdorft, Switzerland native Nicolas Muller – the team announcement indicates that there may players added to the roster in the future.

“Both of these young men fit well into what we are building here at Spartan Hockey, and will be a big part of our program moving forward next season,” coach Danton Cole said in a release. “We will be adding one or two more recruits to complete this class.”

Nodler, currently a star forward for the USHL’s Fargo Force, is a 2001 birth-year player who grew up playing for Honeybaked before making the jump to juniors.

Muller, meanwhile, is a 1999 birth-year forward currently playing for Modo Hockey in the Sweden J20 SuperElit.

The 6-foot, 170-pound forward has played for Switzerland in both the 2018 and 2019 IIHF World Junior Championships. This past tournament, he recorded five assists in seven games playing on Switzerland’s top line, helping them to the medal round and a fourth-place finish.

“Nicolas brings a tremendous amount of experience and skill to MSU,” Cole said. “He was an integral part of Switzerland’s success last year at the U20 World Junior Championships. He has also been a leader on his teams both for Switzerland, internationally, and in Sweden for his junior team. We look for him to step in and be an impact player his freshman year.”

He has averaged nearly a point per game with Modo in 2018-19, registering 40 points in 42 regular-season games, along with seven points in five playoff games.

Nodler, meanwhile, is one of the top ranked Michigan names heading into the 2019 NHL Draft. He was ranked No. 75 among North American skaters in the latest projections by NHL Central Scouting.

He has recorded 42 points in 51 games with the Force as a rookie forward.

“Josh has had an excellent year and has progressed very well,” Cole said. “He is a very smart player and makes the players on the ice with him better. His 200-foot game is going to make us a much deeper team at center. Josh has always been a great leader both on and off the ice and he will fit in well with our culture.”