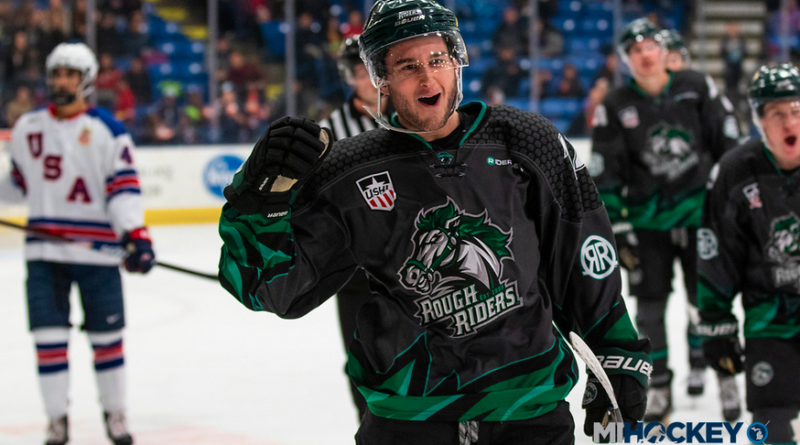 Good in his own zone, good in the offensive zone, capable of playing multiple positions, etc. – that’s why he’s a University of Maine commit.

He’s also available to help out in a variety of game day responsibilities around the rink, apparently.

UPDATE: Sasson has told MiHockey that the person slated to sing had to cancel, so he filled in. “So funny…I was nervous for sure but it was definitely worth it.”

He’s no Cooper Marody in terms of singing, but, still, the MiHockey team would like to give the Birmingham native and Oakland Jr. Grizzlies alum some mad props for doing something rather unique before the game.

Here’s the clip the RoughRiders shared:

Last night, for the first time in our 20 year history the Riders were honored to have player Max Sasson sing one of the toughest songs to sing, our National Anthem!Thanks Max for all you do for the team and community! #brave #firstplayer #whosnext #ushl. Enjoy a few moments! ❤️🇺🇸 pic.twitter.com/q8Bs33YuJT

Didn’t impact his on-ice performance, either, as Sasson set up the overtime game-winner in a 1-0 RoughRiders victory. He also had four shots on goal.

Stick tap to teammate Blake Pietila, as well, who posted a 23-save shutout between the pipes to make sure multiple Michigan natives had strong showings in (and before) the contest.