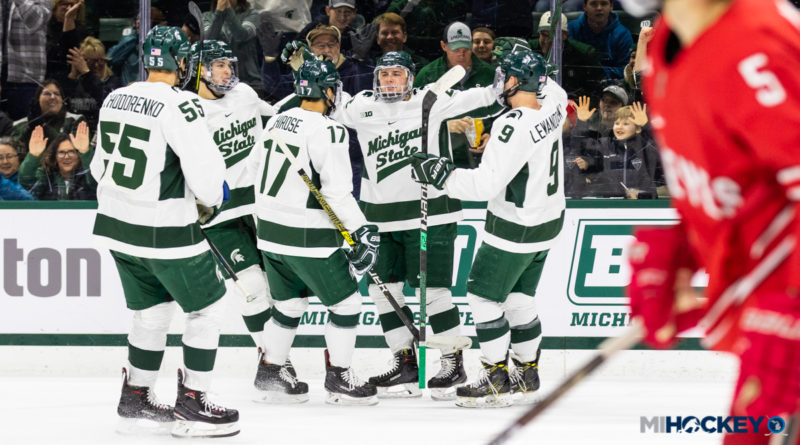 Eight of them came from the Spartans – and half of those came in the final five minutes of regulation and/or overtime.

In a high-scoring affair, the Spartans rallied from 6-3 and 7-4 deficits in the final stages of the third period to force overtime against No. 4/7 Ohio State and record a Big Ten ‘victory.’

After playing five-on-five for five minutes in the extra frame for an NCAA tie, Logan Lambdin found the back of the net to give MSU the extra point in the Big Ten standings.

The Spartans will certainly chalk it up as a ‘win’ in front of a Munn Ice Arena crowd that also got to see the Stanley Cup on the concourse during the first two periods.

In regulation, Taro Hirose and Dennis Cesana both scored twice, while Zach Osburn, Cody Milan and Lambdin all scored the Spartans.

Patrick Khodorenko had four assists in the game, while Drew DeRidder made 32 saves between the pipes.

Here are the three goals in the wild third-period comeback:

The Spartans trailed 7-4 with 5:00 to go… Take a look at how the Spartans rallied from behind to tie the game at 7-7, starting with this goal from Osburn pic.twitter.com/tfiBw1vCSR

7-6… Taro Hirose scored his second goal of the game on the power play to put the Spartans within one pic.twitter.com/722C54jc0Y

7-7… ALL TIED UP! Dennis Cesana scored the game-tying goal with 47 seconds left pic.twitter.com/wkggPKQXrz

Michigan names on the Ohio State roster found the scoresheet, as well; Trenton native Quinn Preston posted a goal and two assists, while Dearborn native Dakota Joshua registered a goal and an assist.

Ohio State had kept the opposition to two goals or less in 14 of their last 18 games.