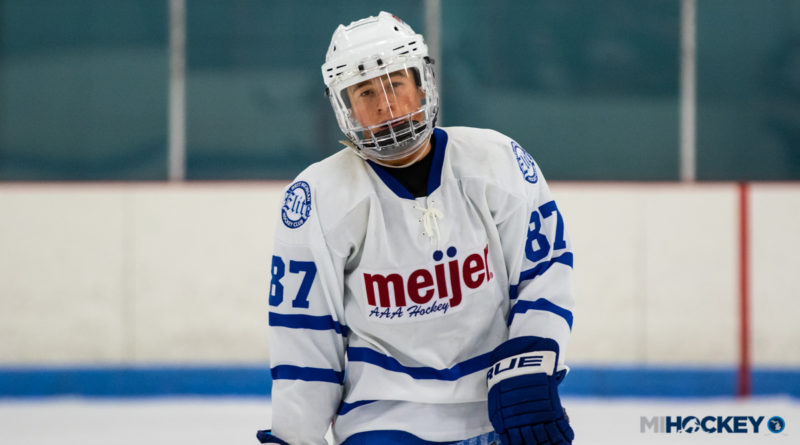 The 2018-19 hockey season came with a jump from AA to AAA hockey for Branden Piku, and he has wasted no time making an impression with his new Meijer 16U club.

Piku, who has already had a viral video moment on the season, has now given a verbal commitment to Lake Superior State.

“I chose LSSU because it’s really unique,” Piku told MiHockey. “It’s a fairly small school, which I think is a good thing because it allows you to create a strong relationship with your teachers, classmates, and teammates. Also, the coaching staff is outstanding. They’re great coaches as well as great people, and they’re not just about making you a good hockey player, but also a good person. The last reason I chose LSSU is their arena. I really felt at home there and I believe that’s the most important part.”

The St. Clair native spent 2017-18 playing for the St. Clair Shores Saints 16U team before joining Meijer this year. The calendar had yet to turn to October before he registered this highlight-reel goal with his new team:

Can you say GOAL OF THE YEAR?! 👀 🚨 #NAPHL @MeijerAAAHockey U16 forward Branden Piku wins it in overtime for his team with this incredible goal during the @NAHLHockey #NAHLShowcase #SCtop10 @Buccigross @ESPNSCTop10 pic.twitter.com/OUaqDFHtHo

Piku currently has 18 points in 26 games for Meijer, per the organization’s official website.

He has a ways to go before he’s suiting up for the Lakers, but he’s cherishing the moment of committing to Damon Whitten’s program for the time being.

“I’m very excited and grateful to have this opportunity, it’s what I’ve always dreamed of. Go Lakers!”