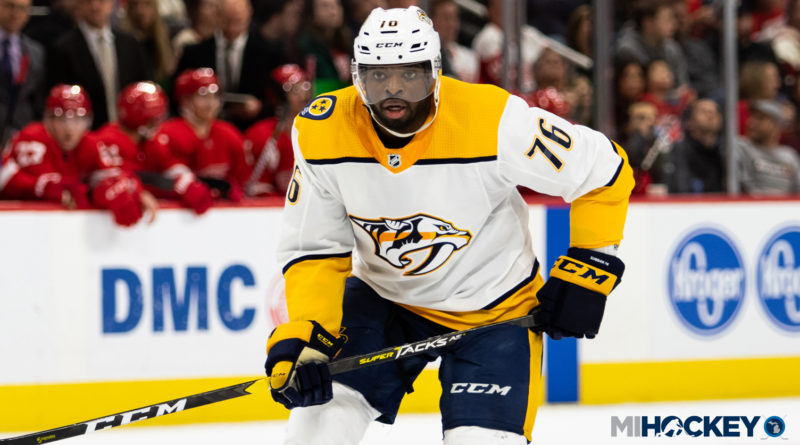 It’s a terrible thing that no kid should ever have to deal with.

But 13-year-old Ty Cornett, a Metro Detroit area player, had unfortunately been on the receiving end of racist taunts this season during play, as father Matthew Cornett said in a Reddit post.

Matthew Cornett commented, “This year has been tough. My son is very aggressive and loud, so that brings out the trash talk. I have no problem with trash talking at all (part of the sport), but the racist talk needs to stop. Between the N-word being thrown at him over and over, being called monkey by players and parents, having an entire team beat their chests and act like gorillas whenever he touched the puck.”

When PK Subban caught wind of it, he took a moment to send a video message to the player prior to the Nashville Predators-Detroit Red Wings game at Little Caesars Arena on Friday.

In what really is a terrific reminder for everyone in all levels of hockey, Subban says, “I heard a little bit about you and what you’re going through. I can tell you this right now, that as long as you’re still breathing in this world, you’ve got to believe in yourself and let nobody tell you what you can and can’t do, especially if it’s because of the color of your skin.”

Watch the full video below:

My 13 year old son has been dealing with a lot of racist taunts this year. He received a text message Saturday night from his favorite player PK Subban from r/hockey

It’s worth noting that in 2017, USA Hockey added stronger verbiage to the game misconduct penalty in Rule 601 in efforts to curb hateful language: “a game misconduct penalty shall be issued to any player or team official who uses language that is offensive, hateful or discriminatory in nature anywhere in the rink before, during or after the game.”