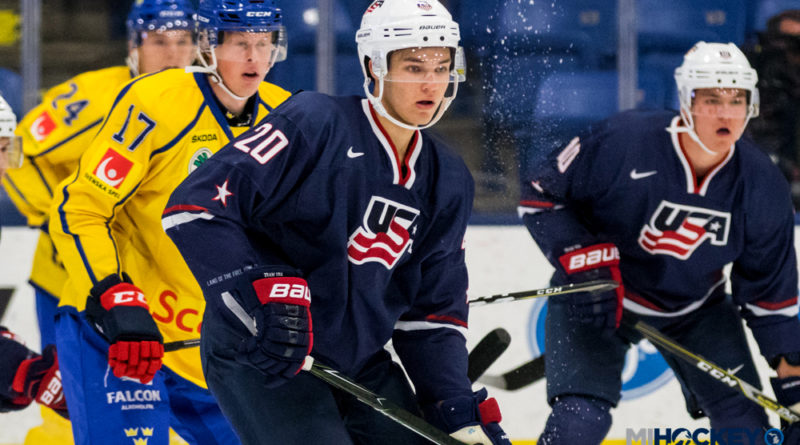 USA Hockey has announced its preliminary roster for the upcoming World Junior Championship, and Michigan will be well-represented.

Detroit native John Vanbiesbrouck, the assistant director of hockey operations for USA Hockey, is serving as the team’s general manager. Vanbiesbrouck was on NHL Network to help unveil the roster this afternoon.

Representing Michigan on the U.S. National Junior Team will be:

John Vanbiesbrouck on the forwards: “Storyline around Jack Hughes, he’s a dynamic player and double underager and somebody who’s fun overall to watch. But I think we have good balance up the middle, Ryan Poehling is a good hockey player, along with Josh Norris… I think up the middle we’re gonna be good with Hughes, Norris, Poehling and Jack Drury. That’s our slate so far, but there’s guys challenging for that center position. I think as we all know the center position is so valuable.”

John Vanbiesbrouck on the defensemen: “When you look at K’Andre Miller and Mattias Samuelsson, we have size, we have strength and we have athletic ability, and I think K’Andre Miller probably exemplifies that the most. He’s at the University of Wisconsin… But I think we have depth there, we have some returners, Quinn Hughes brings some different type of dynamic from the back side. I think we’ll be able to score, an added dimension from the back side where you really need to get your supplemental scoring from.”

John Vanbiesbrouck on the goaltenders: “Cayden Primeau’s at Northeastern right now, he’s having a good year. He’s athletic and probably one of the surprises that we have coming forward is Kyle Keyser. He’s at Oshawa in major junior right now, he’s leading the league in save percentage and second in goals-against. He’s been really solid, I’ve been out to watch him a ton. He had a great camp with us this year in Kamloops. The person to watch out most for is Spencer Knight. Another double underager, Spencer has such great ability. His puck-handling skills are something that are on the NHL radar and for fans to be watching, you’re gonna remember the name Spencer Knight.”

Team USA has come home with a medal in three-straight World Junior Championships for the first time; the Americans won gold in 2017 and bronze in 2016 and 2017.

“We’re drawing players from every state – we could basically have two teams now,” Vanbiesbrouck said. “We have such depth and a well of great athletic talent. We’re getting some of the best athletes in our country to play this sport, and I think our ADM model, the way we’re training kids at a young age, is starting to came through, and our National Team Development Program is really doing a great job in Plymouth, and we’re very proud of that.”