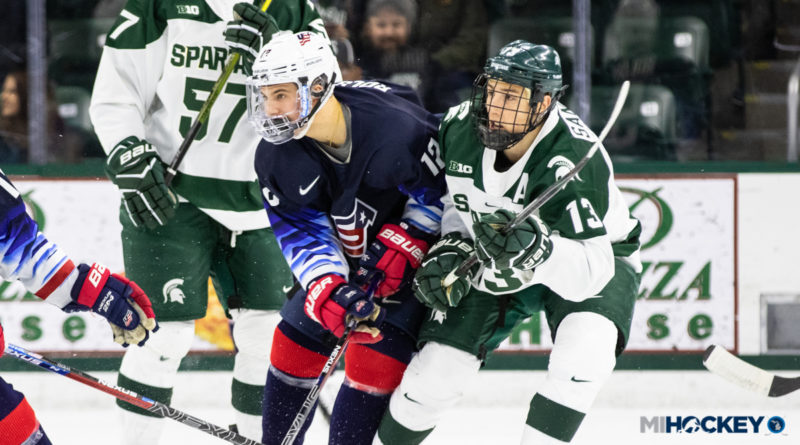 Thanks to a third-period goal from NTDP alum Patrick Khodorenko, Michigan State recorded a 1-0 victory over Team USA at Munn Ice Arena in East Lansing.

John Lethemon and NTDP product Drew DeRidder combined for a 28-save shutout between the pipes for MSU – the pair both played half the contest.

“It was a good battle and I thought that early on they had jump,” MSU coach Danton Cole said after the contest. “We had a little bit of exam legs kind of early on, but I thought about halfway through the first period the guys got moving and stopped turning pucks over – you definitely can’t do that against a team like the U.S. team, but I thought it was a really good hockey game,” head coach Danton Cole said. “I thought both teams skated well and made plays. I thought it was good for us – and not just because we ended up on the right side of it – but from an overall temple of playing it was good.”

Cam Rowe stopped 32 shots for the NTDP, including all 22 that came even-strength (Khodorenko’s tally came on a power play for MSU).

Photos from the contest: