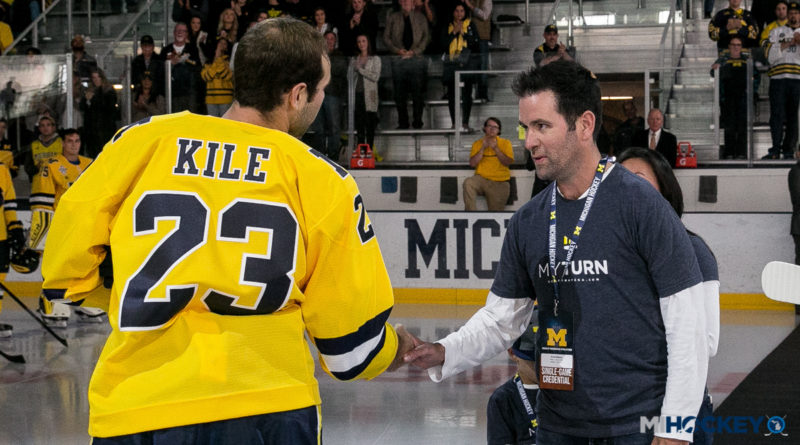 He inspired many during his battle with ALS.

Now, the hockey community has to say goodbye to Scott Matzka.

The University of Michigan alum passed away today at the age of 40.

“Scott was a great player, tremendous teammate and true champion,” says head coach Mel Pearson. “My thoughts and prayers are with the Matzka family during this difficult time.”

The Wolverines rallied around the alumnus (he played for Michigan from 1998-2001), helping Matzka’s “My Turn” foundation. For the past three seasons, they have hosted #IceALS game at Yost Ice Arena, raising funds and awareness in the fight against ALS.

“It is always hard to judge because awareness can’t really be measured,” Matzka told the Wolverines’ official site this fall. “My Turn is an awareness campaign. We’ve raised money for several organizations and partnered with the Susan Mast ALS Foundation (in Grand Rapids, Michigan) to start the My Turn Project Fund to help others with ALS in western Michigan with construction projects. In my mind, we’ve been very successful educating and informing people about ALS and raised significant funds to help with my care.”

The Michigan Hockey family is saddened to hear of Scott Matzka’s passing after his courageous battle with ALS. Our thoughts are with his family. pic.twitter.com/od2vpc2q18

Matz, you will be missed! Thanks for the great memories! Love ya bud! RIP Scotty! pic.twitter.com/JD1mMWlcKf

My heart is heavy over the passing of my classmate, teammate, roommate and friend, Scotty Matzka. He was a brave and courageous warrior both on and (especially) off the ice. Scotty, your mates will never forget you and we vow to continue your fight against ALS. #MyTurn #RIPScotty pic.twitter.com/OgRt9bYXCz