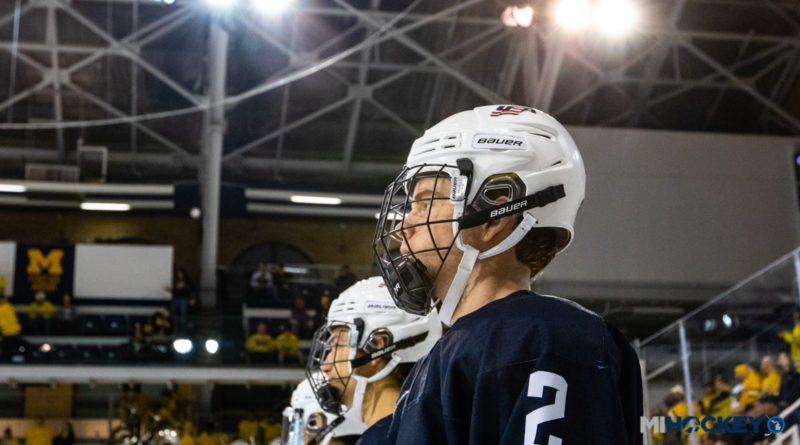 Cam York must have liked what he saw at Yost Ice Arena in October.

The USA Hockey’s National Team Development Program Under-18 Team defenseman has announced his commitment to the University of Michigan.

York is a ‘A Skater’ on NHL Central Scouting’s most-recent list for the upcoming 2019 NHL Draft, meaning he is regarded as a potential first-round draft pick.

“There are many reasons, but I think just the coaching staff and the facility, and the way the state of Michigan supports their hockey team, there’s a lot of things to like about it,” York told MiHockey. “I was drawn to it in many different ways, but those are probably the main ones for me.”

Congratulations to #NTDP U18 defenseman @camyork2 on announcing his commitment to play college hockey at @umichhockey! pic.twitter.com/IefKCbhNSe

York, a Shattuck St. Mary’s product, recorded one assist and a +1 rating in the NTDP’s victory over Michigan at Yost on Oct. 12. He said that game played a big part in his recruitment after de-committing from Boston College.

“It was…I knew that was one of the top schools I wanted to go to,” York said. “Playing there and seeing what the atmosphere was like, I kind of knew that was the place for me.”

A native of Anaheim Hills, Calif., York joins John Beecher as Team USA players committed to Michigan on the Under-18 Team roster.

“Yeah, I love Beech. He’s one of my good buddies and we’re going to have a lot of fun together at Michigan for sure.”

He was one of the members of the ’01 birth-year frequently called up to play with last year’s Under-18 Team, and York joined them for the trip to the 2018 IIHF Under-18 Men’s World Championship where Team USA won silver. York was named to the tournament all-star team after recording six assists – most of any defenseman at the prestigious event.