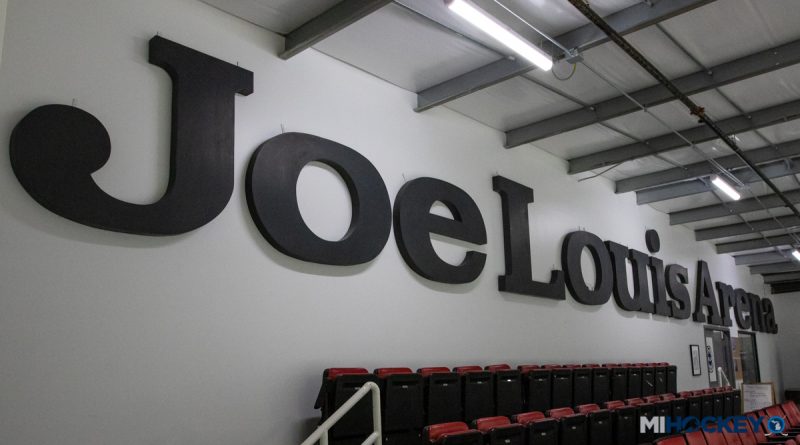 PLYMOUTH – Wondering who bought the Joe Louis Arena letter signage from the former home of Hockeytown?

Turns out, it was a rather passionate hockey family with a rink of their own.

If you play a game at the new Victory Ice Center in Plymouth, you will skate under the iconic JLA letters.

As an added tribute to Hockeytown history, you will even enter the building the way millions of hockey fans once did at The Joe – underneath letters that spell out ‘Gordie Howe Entrance.’

Both were acquired by the Cappo family, owners of the renovated Victory Ice Center (previously the Arctic Pond) and the Victory Automotive Group – sponsors of the Victory Honda AAA Hockey Organization.

“I’m very proud of it,” Michael Cappo said when he was discussing the newly-opened Victory Ice Center. “As I tell people, it’s an ongoing work of art for us, there are always things we’re trying to improve on. We just put up the Gordie Howe Entrance sign, and we’re really happy with the Joe Louis Arena sign.”

Cappo said his brother, Eric, saw the online auction and couldn’t resist purchasing a one-of-a-kind JLA keepsake like the famed letters that hung on the outside of the Red Wings’ home.

“That was my brother, it was on auction, he calls me up one day and says, ‘guess what I bought.’ I thought it was cool. We went over and took it down – I grew up going to Red Wings games and The Joe is like, where hockey began for me, watching professional hockey there. It was really cool. Kind of sad when we went down there…they were taking all the seats out. We went in the locker room and everything’s ripped up. I haven’t had a chance to go to LCA yet, but I hear that’s a pretty world-class replacement.”

The Cappo family were frequent visitors to games at Joe Louis Arena while the kids grew up playing in Metro Detroit. They will be using some of the other items collected to keep building their ‘Shrine to The Joe’ – they already have rows of seats – and are looking to add more.

“We got the seats, and when I was a kid in the ‘90s, my dad would go into the picture shop every time we would go to a game, and we would buy a few pictures. They’ve got those old red frames around them, and we have a ton of them, so we’re going to kind of build out the upstairs a little bit and the thought is that we’re going to call it Digger’s Den (in honor of the late Don Fardig) and do a lot of Joe Louis stuff. We’re trying to expand on it a little bit. It’s just, memorabilia that we really care about and cherish.”

More on the new Victory Ice Center in Plymouth: