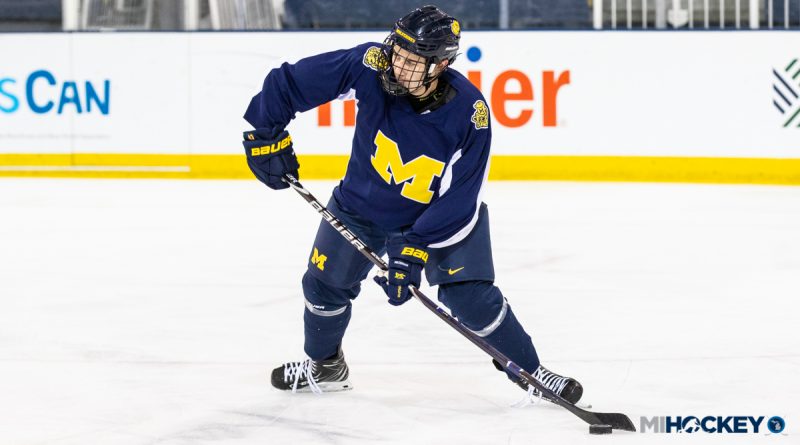 Quinn Hughes has returned to Michigan and has high hopes for his sophomore season with the Wolverines. (Photo by Michael Caples/MiHockey)
College For Coaches For Fans For Parents For Players The Latest University of Michigan Wolverines
October 1, 2018October 3, 2018 MiHockey Staff 3115 Views

Check out MiHockey’s photos from a practice at Yost Ice Arena with the 2018-19 Michigan Wolverines:

After the Wolverines took to the ice for a recent practice, MiHockey caught up with Quinn Hughes, Will Lockwood, Josh Norris and Jake Gingell.

Hughes, a sophomore defenseman, was picked seventh overall by the Vancouver Canucks in the 2018 NHL Entry Draft and spoke of his decision to come back, as well as his how his brothers Jack and Luke are faring with their respective teams.

Lockwood, a Bloomfield Hills native and junior forward, talks about his season-ending injury last season and returning for this junior year at 100-percent.

Norris (Oxford) returns for his sophomore season after most recently being dealt to Ottawa as part of the trade that sent NHL all-star defenseman Erik Karlsson to San Jose. He talks about the adjustments from freshman to sophomore year and expectations for the season.

Gingell, a Dexter native, joins the Maize and Blue for his freshman season after spending the last two seasons with Youngstown in the USHL. He speaks about living out his dream and also the adjustments of being a student-athlete.