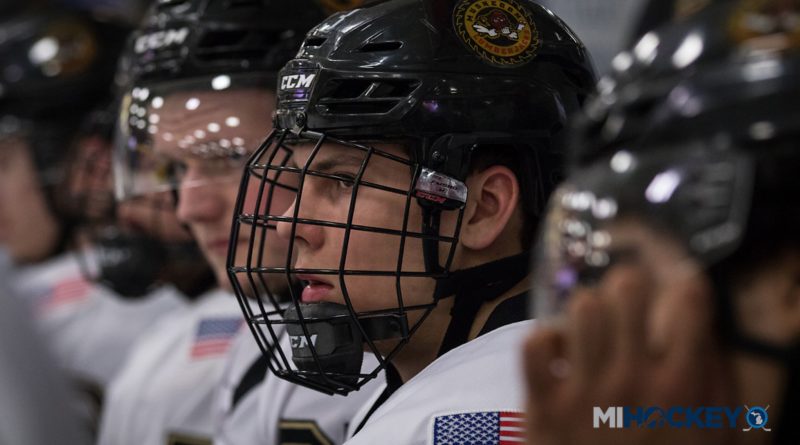 Mike Hamilton said his team’s chemistry has been “awesome” so far.

If you need evidence, it’s easy to find – the Muskegon Lumberjacks are off to the best start in franchise history.

With a 6-0 start, the Jacks have marched to the top of the USHL standings – both in the Eastern Conference and league-wide.

“We’ve got a great locker room, guys who push for each other and we’re all ultimately real, real happy with what we’ve assembled in the locker room,” Hamilton said in response to the chemistry question. “It’s been huge for us.”

The first-year bench boss said that his team’s red-hot start can be credited to a complete team effort – with some help from the goalie. Netminder Brandon Bussi, a South Beach, N.Y. native and St. Lawrence commit, has started all six games for Muskegon. In those six appearances, he has six wins, two shutouts, a 1.81 goals-against average and a .937 save percentage.

“First of all, our goaltending – Brandon Bussi has been phenomenal,” Hamilton said. “He’s been keeping us in games, making the save that keeps it at a one-goal game until we’re able to get our wits and get everything going in the right direction. He’s been the key.

“Besides that, it’s just been a total team effort. It’s been different guys every night. Scoring the goals, we’ve got guys chipping in at all the different areas, from the backchecking side to, our penalty kill is at I think 92 percent, and that’s just hard work.”

Hamilton was being modest. The PK is actually at 96.4 percent – second only to a Waterloo Black Hawks squad that has yet to give up a goal while shorthanded. When you factor in that the Lumberjacks lead the Eastern Conference in penalty minutes – a total of 107, compared to Waterloo’s 73 – it’s that much more impressive.

Muskegon has generated 26 goals in their six first games, while only allowing 11. After recording a 4-3 win over Fargo and a 6-3 win over Sioux City in the USHL Fall Classic, the Jacks stormed into Youngstown and beat the Phantoms 2-1 and then 3-0 to start October on a high note. From there, they have recorded a pair of home wins – a 6-0 shutout of Chicago on Oct. 13 and a 5-4 win over Youngstown the next night.

“I don’t think any of them are doing it on their own – it’s more of the team effort,” Hamilton said. “You’re going to have to have guys who ultimately do it – we have those three guys who have been chipping in, and Bobby Lynch, as well. Our blue line, they’re strong, we have a very strong blue line that’s able to make direct passes and we’re not having to play along the walls and muck it up, we’re able to play with skill and play in the middle of the ice.”

That blue line also features three defensemen in the top 20 of defensive scoring – Alex Yakovenko has five, Hunter Skinner has four and Matthew Staudacher has three.

Add in the renovations that have went into L.C. Walker Arena, and it’s been a fun fall for the Lumberjacks. Nearly $1 million has been put into the building, with renovations including brand-new glass around the rink, a pavilion/beer garden, an enlarged concourse, new executive suites and club-seating areas, a kids zone and party decks.