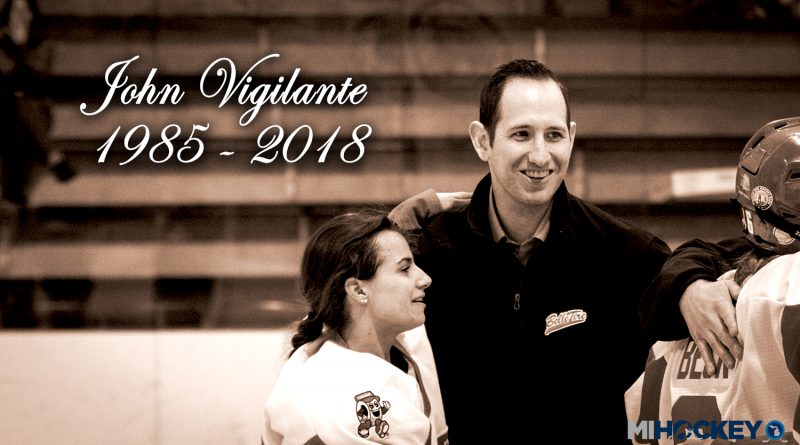 He was known as an impressive player on the ice, and he was making his mark on the coaching side soon after.

However you knew him, he will be missed.

John Vigilante has passed away. He was 33.

A Dearborn native, Vigilante played for USA Hockey’s National Team Development Program before four years with the Plymouth Whalers. From 2006 to 2013, he carved out a professional hockey career; four seasons of AHL hockey, including a 2009-10 season with the Grand Rapids Griffins. He played two seasons in Italy after that, and then one year in Sweden in 2012-13 before returning home.

In Vigilante’s season with the Griffins, he made such an impact away from the rink that he was named the team’s “Man of the Year” for his “outstanding contributions to the West Michigan community” after participating in children’s hospital visits, volunteering at youth hockey practices, talking to kids during school visits and more.

Vigilante stepped behind the bench of his OHL franchise for the 2014-15 season, working with the Whalers as an assistant coach during the team’s final season in Plymouth.

From there, he joined his brother, Mike, in coaching for the Belle Tire girls’ program. The Vigilante brothers led BT to the last two 19U Tier 1 state titles, and in 2o17, a state and national title at the 16U age group.

MiHockey will share more information as we receive it.