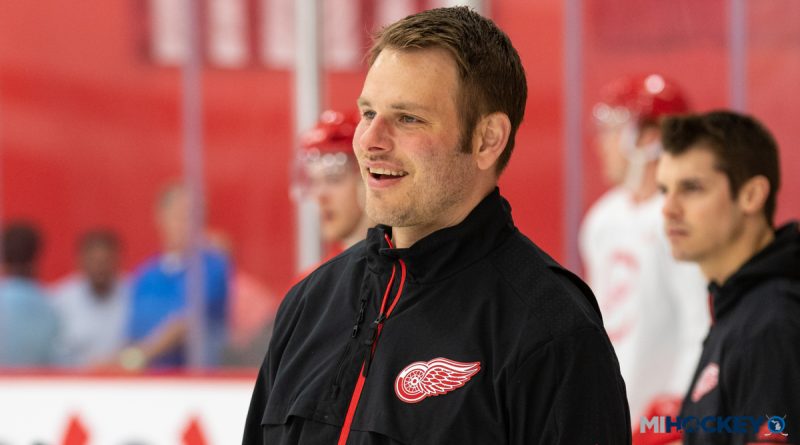 Brandon Naurato has been building his hockey training resume in impressive fashion the last few years.

The Detroit Red Wings have hired Naurato, a Livonia native, as a player development consultant.

Naurato, a Detroit Catholic Central and University of Michigan alum, will be working for director of player development Shawn Horcoff and player development assistant Dan Cleary in his new capacity with the Winged Wheel franchise.

“Like most kids in Michigan, I grew up a Red Wings fan, and my main goal now is, I’ve been given an opportunity within the organization in a player development role, and I want to help in any way I can,” Naurato told MiHockey. “I’m excited to learn from guys like Jeff Blashill and Dan Byslma and then Shawn Horcoff and Dan Cleary.”

The road to Hockeytown began with a meeting between Naurato and Kris Draper. Naurato, the director of player development for Total Package Hockey, showed Draper how he was constructing the training curriculum for TPH based around his own analysis from hockey’s highest level.

Naurato founded the Detroit branch of Total Package Hockey in 2012. Along with operations of the TPH Center of Excellence, he has worked with the likes of Zach Werenski, Kyle Connor and Andrew Copp while also serving as a skill development coach for the OHL’s Saginaw Spirit.

“I showed Kris Draper what I did throughout the course of the year and showed him what I was doing with studying individual players at the time,” Naurato said. “Really, what I did was I clipped every goal by the top 20 goal-scorers in the NHL in the last three years, and that’s how I built a development plan for TPH. Here’s what the best guys in the world are doing, here’s how they create time and space and manufacture offense – these are the skills and concepts that we need to teach. I guess he liked what he saw – that was awesome on its own.

“From there, Draper said you need to meet Horcoff, who then offered me an opportunity to work with the prospects a couple days a week in the summer and then help out and present at development camp. I was pushing pucks at development camp and then I did my presentation on how goals were scored to forwards and defensemen separately two different days. That turned into a meeting with Ken Holland and Blashill and Ryan Martin and looking at more of a team basis, how I thought I could help the Red Wings.”

Naurato will be working primarily with Red Wings prospects in Grand Rapids in his new capacity.

“I would say that it’s trying to make sure that the guys who are supposed to be playing with the Detroit Red Wings in the future get there, and when they get there, they have success and understand the style of play that the Red Wings play – that they can jump into a role and do what they do. They are drafted because of their skill set and what type of kids they are – when you draft players, you want everyone to make it. You want guys to be there.”

“I’m just thankful and excited to have the opportunity to be there,” Naurato said. “These guys have some of the best minds in hockey. I really respect them, not only for their brains and their experience, but who they are as people and I think the culture that the Red Wings have had and will continue to have is what it is for good reason. They bring in quality people, and I’m just excited to learn and slowly do things the right way, earn everyone’s trust, and to have an impact wherever it may be. I’m just a piece of a puzzle, I’m just earning my stripes and I’m thrilled to be able to do this with Detroit.”