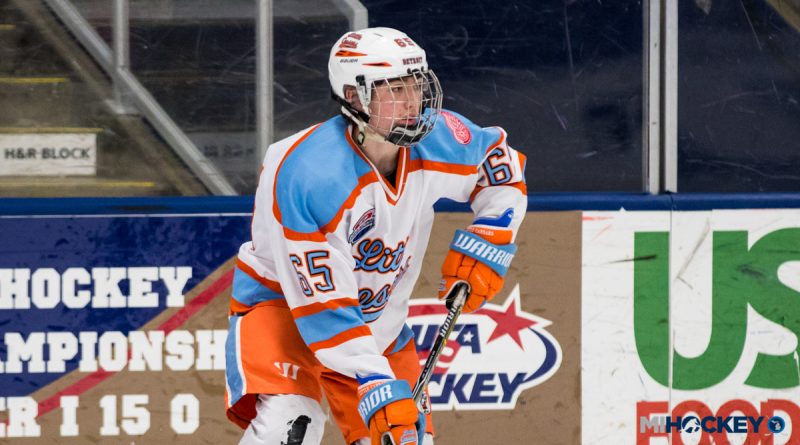 Photo by Michael Caples/MiHockey
Amateur Hockey The Latest
May 30, 2018May 30, 2018 MiHockey Staff

Western Michigan is a Bauer school – now in more ways than one.

Jacob Bauer, a defenseman from the Little Caesars 15-Only squad, has committed to coach Andy Murray and the Broncos hockey program.

“Ever since I was a kid, it was always a goal of mine to play college hockey – especially for Western Michigan University,” Bauer told MiHockey. “WMU is a perfect fit for me to further my education as well as my hockey career under such a great coaching staff.

“Also, the Lawson Lunatics are one of the best student sections in college hockey and it would be awesome to play in front of them.”

The Milford native is one of the anchors on the blue line for Kris Draper’s Little Caesars squad, which captured another MAHA state title this spring before finishing as national runner-up in the 2018 USA Hockey National Championships at USA Hockey Arena in Plymouth.

The blueliner was selected by the Lincoln Stars in the fifth round of this year’s USHL Futures Draft, as well.

He’s the second player on the LC team to commit to WMU, joining Mark Estapa in pledging his allegiance to the Broncos. Six players from the 2017-18 team roster now hold college commitments; Jacob Truscott (Michigan), Ben Schoen (Miami), Carter Mazur (Michigan State) and Tanner Kelly (Michigan State) join future Broncos Bauer and Estapa on the list. In 2018-19, MSU commit Tiernan Shoudy will rejoin Draper’s squad (he played up with the LC U16 team), and they will also welcome Ryan Kirwan, a Penn State commit, into the fold.

” I would like to thank my family, coaches, friends and teammates who have helped me get to this point!” Bauer said.